I Make A Lot Of Silent Compromises Like Every Other Indian Daughter-in-Law Out There – Do You KNOW What They Are?

Are you aware of the lesser known compromises made by Indian daughters in law?

As Women, daughters-in-law undergo a lot of internal struggles and let go of most of their desires JUST for the smooth functioning of their families – Do you know what they are? 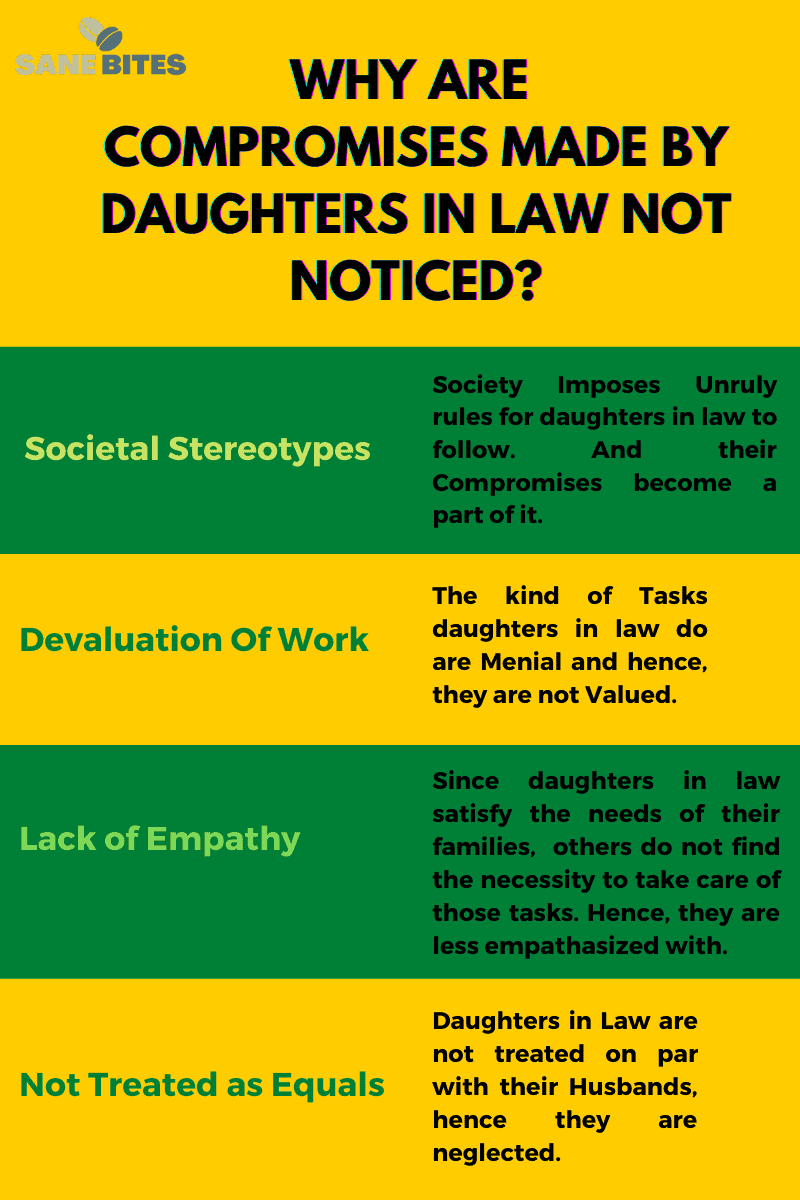 11 Lesser-Known Compromises made by Indian daughters in law That Every Husband & In-Laws Need to SEE!

In this blog, I have compiled a list of 11 lesser-known compromises that most daughters-in-law make on a day-to-day basis with a string of my personal experiences.

COMPROMISE 1 :: Daughters in Law should Forget the Concept of their OWN-TIME!

No matter how sophisticated a life the daughters in law lead, there is going to be an absolute lack of their own-time particularly when they live with their in-laws.

Daughters in Law should be Responsive all the Time

Let me point my own case here, something I realised when I am around my in-laws.

At times, when I’d be doing some work OR reading a book, I hear my MIL calling me either for some work OR for no specific reason.

Isn’t my focus getting distracted here – Why shouldn’t DILS have their own space and time that in-laws should also respect?

Yes, I have lost my cool many times yet I would respond and attend to her just by the way of respecting her; for I give importance to my value of respecting the elders.

But unfortunately, when such instances keep repeating, Is that not a Compromise?

Shouldn’t in-laws respect their time and space too – Why are dils taken for granted?

COMPROMISE 2 :: Daughters in Law Should Follow Menstruation Guidelines in India!

Having a mother who is too stringent with the procedures she follows during the menstruation cycle, I know how difficult it is for a woman who has never experienced such discriminatory practices prior to her marriage, to cope with the menstruation taboo at her marital home.

Daughters in Law Should Isolate themselves During their Periods

Whenever I see my mother being strict about not allowing me inside the kitchen and touching things during my periods, I sympathise with my sister-in-law who had never faced such issues back in her house prior to her marriage.

She is trying to get herself adapted to those new or rather uncanny practices, but finds them completely annoying. Yet my mother would never make an effort to understand the kind of difficulty she is going through and I am trying to change my mother’s perspective on that front.

Anyway, if what my sister in law is doing isn’t a compromise, then what is?

COMPROMISE 3 :: Daughters-in-Law should be Ready for Sudden Plans Their In-Laws Make!

There were times when my MIL would suddenly come and ask me out for shopping when I had actually prefer staying put at home.

Of course, she cannot go alone and I cannot let her down.  And I would be taken for Granted.

Daughters-in-Law should be In-Law’s Companions

Be it a visit to the temple or a supermarket, someone has to accompany her and I become her default go-to person.

And that means, my work would get shattered, my mindset would take a hit, and my time would not be valued.

Isn’t that a lesser known compromise made by most DILS out there?

Non-working daughters-in-law are ones who face financial issue when it comes to shopping things of their desire.

Daughters-in-Law Abstain themselves from Asking things

At times, when I go shopping with my mother-in-law, I would be prompted to purchase something.

However affordable the dress/earring that I am eyeing could be, clouds of hesitation tend to shroud my insides that I don’t even make an effort to ask her.

Had it been my mother, wouldn’t I have asked her with all my heart?

If this is not a Compromise, then what is?

COMPROMISE 5 :: Daughters-in-Law should get Accustomed to their New Home and Culture

Even those women who get married to people of the same faith/religion, face difficulty adapting to the new procedures OR rituals of their new home, as they vary from family to family.

That said, getting used to the protocols of their new home could cause them discomposure and unacceptability at times.

Daughters-in-Law cannot Question the Protocols of their New Home

As a newly-wedded daughter in law, I was put into such a situation where I had to serve my husband’s relatives a meal in the traditional south-Indian banana leaf.

While I used to serve the “Thayir Pachadi” (Salted curd delight with any vegetable) in the top-right corner of the banana leaf (and that’s how they are supposedly served in all functions as well), my in-laws conversely asked me to serve it in the top-left corner.

I was perplexed and could not accept their weird practice especially when it happened so suddenly.

And this one question remained. Why should I change my practices all of a sudden? Why should women change their old practices once they are married?

But there was never an answer – Is this not one of the lesser known compromises made by Indian Daughters in law?

COMPROMISE 6 :: Daughters-in-Law should remain Composed when they are Compared To their Sisters-in-Law

As a newly married woman, I had to be away from MY home. And my parents who obviously missed me visited me every now and then to get their emotions sorted.

By the way of catching up with me, they felt so good. Is there any fault in this?

My mother-in-law, whose daughter is away in the states once pointed out, “Your father can never stay without seeing you. Do you think that we do not miss our daughter too? We just connect through calls once in a while. And that’s it. Not like how you people visit each other, every now and then”

Just because they are “mothers in law”,  can they speak anything?

When would MILS start empathising with their dils? 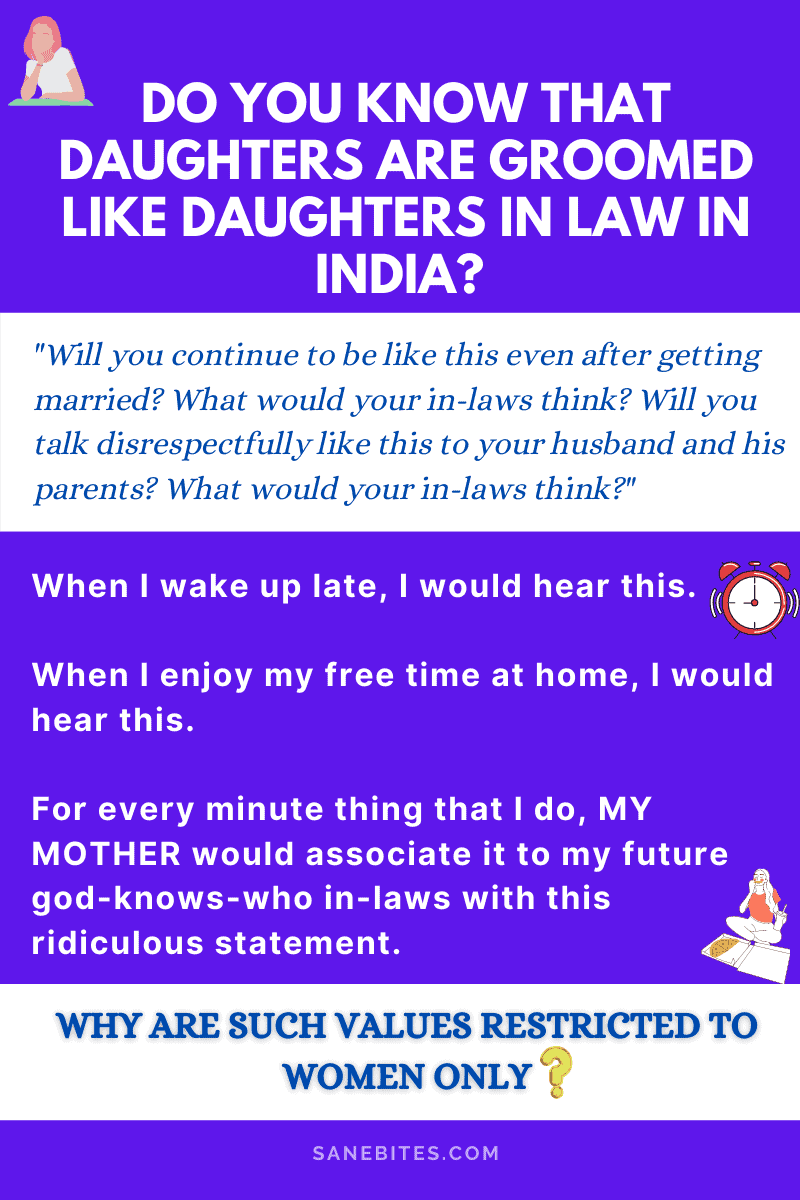 COMPROMISE 7 :: Daughters-in-Law should Eat according to Mothers-in-Law’s Taste-buds and Timings OR Earn their Wrath

If the DILS feel like adding an extra garlic clove to the chutney, they cannot.

If the DILS feel like adding more tomatoes to the gravy, they cannot.

Because it is the mother-in-law’s kitchen and there is no way that daughters-in-law could tweak it according to their liking.

Daughters in Law should Make Adjustments For Their In-Laws

The other day, when I way ready to make some soft oil-less Phulkas(flatbread) for lunch, my mother-in-law did not seem to like the idea. She quickly made a few ghee-greased-chapatis for herself as she kept grousing about not making the same for everyone.

Meaning, when something doesn’t go according to their mind, in-laws would go crazy.

In order to maintain peace in the family, most daughters-in-law are forced to adjust according to them.

Don’t you think it is one of the lesser known compromises made by Indian Daughters in Law?

COMPROMISE 8 :: Daughters in Law should be Prepared to Face their Spouse’s Relatives

At times, my mother in law come up with unforeseen trips to relatives’ places.

If managing the in-laws is a big deal, it is an even greater ordeal for the daughters in law to manage their relatives especially when their spouse is not accompanying them.

Isn’t that a compromise in itself?!

COMPROMISE 9 :: Daughters in Law should Resist their MIL’s Television Menace in India

Exasperating soap-operas are the norms of the day in many Indian households. And my case is no different.

The kind of content depicted in the television is infuriating and influential that I lose my patience with it running non-stop throughout the day.

But how on earth could I stop my mother in law from watching them?

I have no other option but to draw a blind-strap in-between to remain unaffected by those coaxing dramas and unsettling dialogues.

Is that not a compromise?

That said, as a woman, I have faced similar situations too quite a number of times where I had to compress my erratic mood to give a smile to my in-laws acknowledging them that I am doing well.

Daughters in Law should Finish off their Duties No matter What

Can dils take off from their domestic work when they are on their periods?

Obviously no. Because they cannot shy away from their duties as wives OR DILS – Else, they would be judged.

Well, if you cannot see this as a compromise, then what is?

COMPROMISE 11 :: When Daughters in Law cannot Say “NO” to their In-Laws!

Most DILS are not able to say “NO” to their in-laws when they want to. But why?

Even the other day, while eating, my MIL asked me fetch some curd from the refrigerator.

I was feeling Sluggish but do you think I could say, “No Amma. You please take it yourself”?

Had it been my mother, yes I would have refused. But as a Daughter-in-Law, I was under a Compulsion to do the task.

Don’t you think it is a Lesser Known Compromise?

Let’s Start Seeing Our DILS as Our OWN Daughters – And Make Them Feel At Home, Shall WE?

On an every-day basis, daughters-in-law depending upon their family circumstances give up a lot of their preferences/desires for the well-being of their families – To maintain peace and harmony at their homes.

Indeed it takes a lot of strength for them to do this all but are they noticed EVER?

HIGH TIME, we let go of this behaviour and facilitate a comfortable environment for the dils to live their life to the fullest – For they are all human beings like us, Who are we to crib their independence in the name of Patriarchy?

HELLO! How did you find this blog – Share your thoughts in the comments section below.

In case you found it valuable, share it for the benefit of all DILS out there. I would feel so happy and grateful to you ever. Thank you 🙂