How Are Indian DILS Taken For Granted?

No matter how Independent the daughters in law are today, their wavering self-respect and tolerance to persistent high-handedness of their in-laws suggest something crucial – Are Indian Daughters in Law taken for granted?

Read on as I share my Insights as a Daughter in Law highlighting certain Approaches of the In-Laws that supports the case in point. 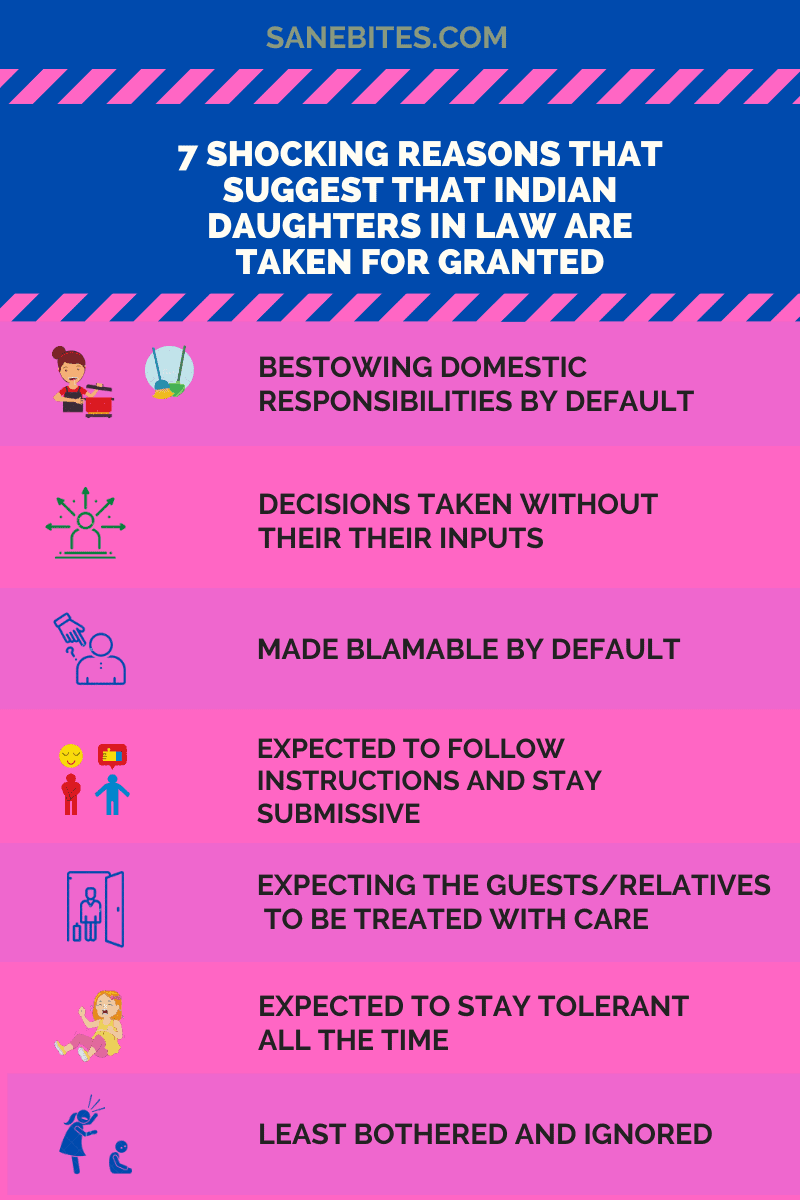 The Following are the reasons why I believe that Indian Daughters in Law are taken for Granted – Come, let’s check them out!

1. Daughters in Law By Default Are Considered the Caretakers of Domestic Responsibilities

By default, Indian daughters in law whether working or non-working, are expected to take care of the domestic activities be it cooking, cleaning, or even washing dishes.

Consider a new daughter in law who is a person non-exposed to such household tasks. Would it be fair on the part of the in-laws to expect her to take care of all the duties of the house as a responsible daughter in law?

How could in-laws expect her to handle such a huge responsibility all of a sudden?

New Dils are Imposed with Responsibilities That They Never See Coming For Them!

One of my acquaintances was subjected to rigorous domestic chores by her in-laws the very first day she came home. They were not bothered whether she knew cooking or not. Nor did they care to ask her if she would be willing to take up the work.

Fine. Did they at least try to guide/help her – NO. Even that didn’t happen.

On the contrary, they burdened her with all the kitchen tasks – Literally, she was forced to cook according to her in-laws taste-buds. Isn’t that unfair?

Doesn’t this situation imply dils are taken for granted even now?

Of course, I am not saying dils should not do anything; they need to contribute their part too but is that fair to make them the ONLY ONES responsible for such activities? Shouldn’t this situation change?

Do You Know these 18 Overlooked Problems of Indian Daughters-in-law?

2. Indian Daughters in Law are always summoned to Greet and Treat the Guests No Matter How Occupied They Are!

When guests or relatives come home, whether the daughters in law are occupied or not, they would be beckoned by their in-laws to prepare drinks or snacks for them.

Of course, it would be inhospitable or morally wrong if the guests are not treated properly. But would that be right of the in-laws to expect the daughters in law to do the task when they are occupied? And what if it keeps happening every single time?

Shouldn’t in-laws be courteous enough to check on their dils, whether they could perform the task-at-hand or not?

Every time I see my father call my sister-in-law to prepare coffee for the guests without checking on her, I get pissed off.

It doesn’t matter what the DILS do, they have to compromise anyway. Else, wouldn’t their act appear discourteous?

My point is, whether the daughters in law are working or non-working, their time has to be valued – And it is not fair enough to take them for granted.

3. Excluding the Daughters in Law from Discussions is Common in India

Be it any important decision that concern the family, Indian daughters in law are not taken into consideration at all. Isn’t that sad?

Vanaja Dhruvarajan’s Journal on Religious Ideology and Hindu Women proposes ways for women to ace up in terms of gender equality, meaning  women are still way behind in terms of Development – Indeed when they cannot make decisions in their own house, how could we expect them to grow in the outside world?

Daughters in Law are Forced to take up others’ Decisions

Once, my big mother in law or rather my husband’s aunt scheduled a Sumangali Prarthana (A Common Pooja done in Tamil Brahmin households) at her place. Since it was an important occasion for the family, the presence of the daughter in law was essential (my presence in this case). In that case, shouldn’t she have taken my word before fixing the occasion?

To my dismay, neither she bothered to check on my availability nor my limitations as a woman. Period.

Rather she was like, “Akila, We have scheduled Sumangali Pooja on the 6th of January. As the daughter in law of the house, you should be there. Ensure to book the tickets “

“How could she even take me for granted?”, my mind reckoned off her insensitive attitude.

Anyway, I am not the only victim here – On a daily basis, I have been seeing lots of dils being forced to give into their in-laws’ decisions whether they find it ok or not.

Even visiting their own parents has become difficult with in-laws meddling too much with their decisions and marriage. It is high time that in-laws start understanding the feelings of their daughters-in-law to achieve equality and equanimity in their families.

4. Indian Daughters in Law should Embrace the Blame even if they are Right

Chauvinism is not a thing of past. It pervades in Indian households even today, in some form or the other. That said, daughters in law are by default blamed and accused of almost no fault of theirs in the name of patriarchy.

Daughters In Law are often pushed into a Pitiable state

Here is an example to add clarity to my statement.

The other day, my brother had missed his wallet on the train, and one of the fellow passengers who had spotted it lying abandoned on his berth immediately called up my brother with the contact card he found.

What followed was not a series of blame-game on my brother for his irresponsibility. Rather my mother told her daughter-in-law, “Is it not your responsibility to take care of your husband’s wallet?”

This instantly got on my nerves, and I shot, “Your son should take care of his wallet. It’s inappropriate to blame your daughter in law for no fault of hers!”

And the same kind of attitude prevails almost everywhere. MILS would be like –

“You should have taken note of it, Daughter in Law”

“You should have done that in advance”

Why are daughters in law blamed unreasonably even now? In that case, aren’t they being taken for granted? Why are not they not treated right?

5. In-Laws Outrightly Exercise their Authority over their Daughters in Law

Everyone from a woman’s marital family consider they possess undue ownership rights over their daughter in law – What has caused this situation?

Commanding the Daughters in Law is considered a Norm

The other day when I visited my husband’s aunt’s house for an occasion, work was aplenty but there were enough women present to take care of the chores. So I decided to limit myself to the portico where I was binging on my mobile phone.

Suddenly, my husband’s aunt rushed out and screeched, “Akila, come! Serve breakfast for everyone”. Her tone was sure commanding and it was as though she was beckoning her house-help to do things.

I was just the daughter in law and nothing else. But she took me for granted that day. It is not wrong to seek help from the daughters-in-law, but isn’t there a way to do it?

No daughter-in-law would hesitate to share their in-laws’ workload when she is being handled kindly – But this kind of commanding and ordering behaviour is not anybody’s pie.

6. Daughters in Law Should Stay Tolerant To Their In-Laws’ Insensitivity

People fail to follow mindfulness when they talk to others. They don’t realize how their sickening-mindset, perception, and words could offend other people easily.

That said, would it not affect a third person like the new Daughter in law of the house?

Daughters In Law Become Mere Spectators of their own Problems

Once my mother in law quipped, “Had we known that you are from this place, we wouldn’t have engaged your proposal”.

This undeniably hurt me but seriously, even if she wanted to sound humorous, I don’t think she should have uttered such an insensitive statement.

Do You Know These 27 Types Of Mothers-In-Law?

7. Daughters in Law are Ignored and Treated like Nothing

In-laws, by default, assume that their Daughters in law are not matured or experienced enough to be aware of certain things. This makes them disregard their daughters in law easily without giving them the scope to mix, help, and learn.

Consider this situation. I have been cooking from the time I was in school; reason being the freedom my mother gave me in her kitchen.

That said, once my mother in law was struggling with the dosa tawa; the dosas were sticking to it making it impossible to be flipped.

Looking at her struggle, I stepped forward to help her. But she was not ready to let me take over; in fact she was not even bothered about my presence. Isn’t that offending?

Anyway, I know this isn’t a big deal but there is a lot happening out there, in almost every household where the DILS are not given their due share of importance and respect. Shouldn’t this see a change? 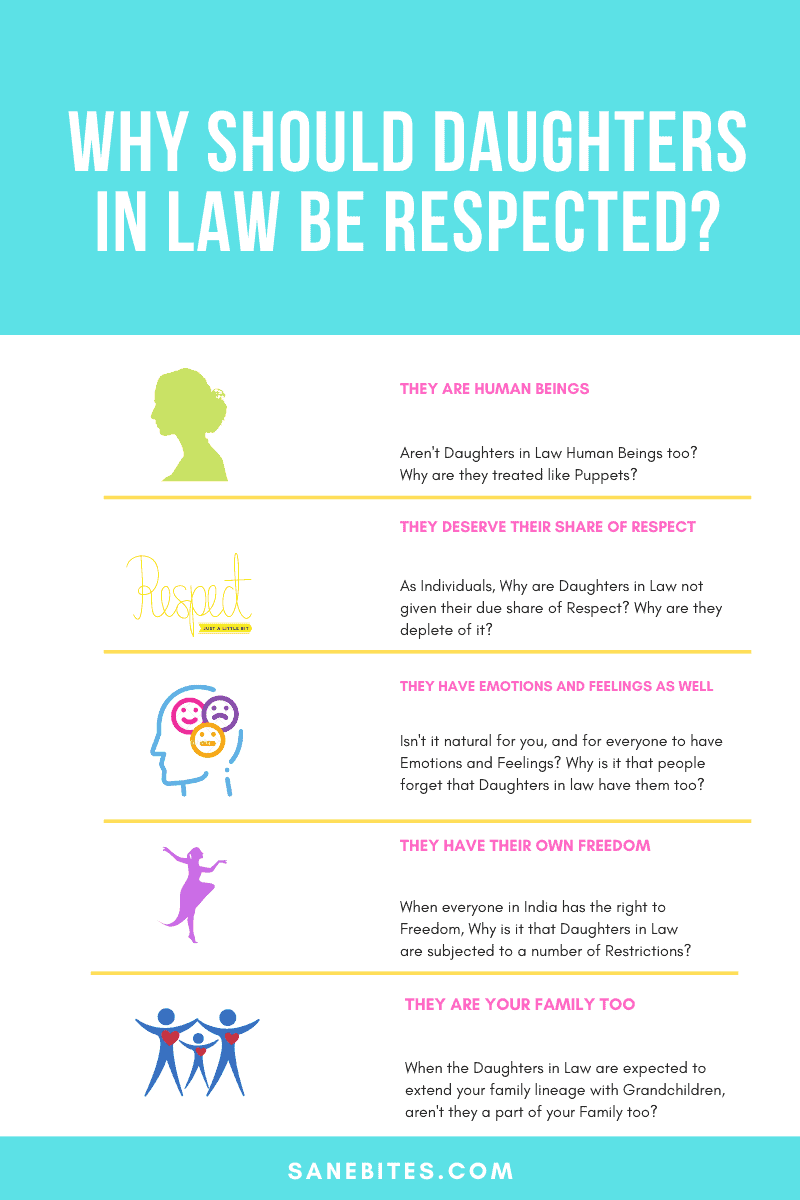 Nurturing a Family Should be a Collective Effort –

It is not just the dils who should be made responsible for everything that happens at home – Then what are the other family members for? Shouldn’t they play their role as well?

I am a person who strongly believes that a home is a place where everyone contributes their part to help and be supportive of one another.

In that case, it is not morally right to only burden the dils with too much work and stress  – Will the society ever understand this?

Daughters-in-law are Human beings too – They Deserve Their Share of RESPECT & LOVE!

Just because women are daughters in law does not mean that they could be taken for granted. Daughters in law are human beings too. They have a heart of their own. And have their self-respect too. Shouldn’t they be treated right?

Treat your DILS right and with all the love, you will receive 10x back. I can say that for sure!

What are your thoughts on this post? Do you wish to share your experiences as a daughter-in-law?