If You Go on to Build Assertiveness as a DIL, Somewhere Inside You Grow, & Into A Strong Woman…

It is natural to have undue inhibitions around your in-laws, to feeling subdued and that you have lost your voice. It is OKAY, relax. But it is also time you roll your sleeves up and learn how to be an Assertive Daughter in law.

This is what I will be helping you with in this blog, so by the time you reach its end, you would have clear answers to your question, “How can I be assertive with my in-laws?”! So come, let’s begin!

1. Daughters in Law Should Learn the Art of Response!

Many day to day situations put Daughters in law in a tough spot around their in-laws that end up,

Haven’t you been there already?

Unfortunately this could tarnish their character as a whole, which is why they need to learn how to respond assertively.

As a daughter in Law, I have found myself in such situations too. But as a conditioned or rather a disciplined individual that my parents have raised me to, I try to limit my responses as much as possible to avoid problems in the family.

DILS Should Know How to Respond in a Subtle Manner

It is sad to notice that most dils are taken for granted by their in-laws.

To quote an example, the other day, my fil asked to accompany my mil to a relatives house. I had work, so I instantly told him that I cannot make it.

It is not that dils should not refuse things to their in-laws; it is all about knowing how to say no, in a SUBTLE way.

In the same scenario, had I reacted crudely,  wouldn’t it have led to ensuing arguments and hostility in the family? 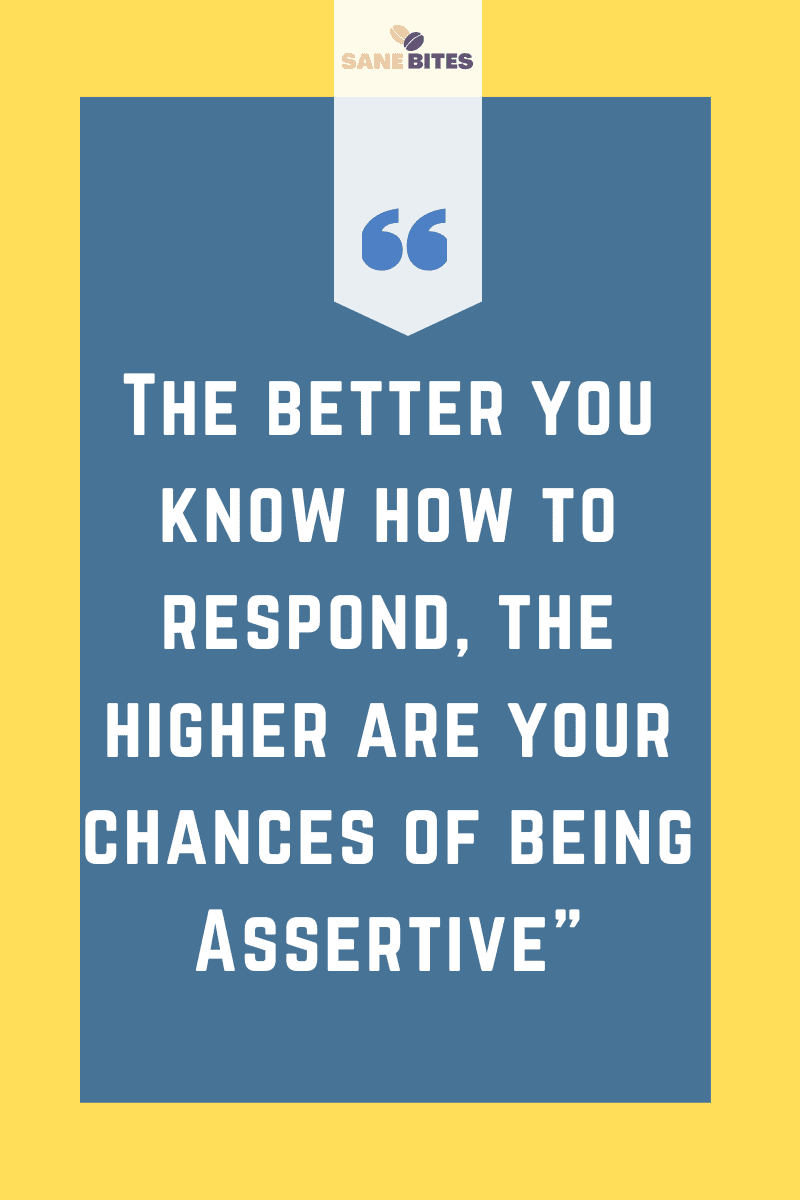 2. Daughters in Law should know When to Respond, You Know Sometimes Being Silent Does the Work!

Sometimes, staying silent is the most powerful way of being Assertive. Wondering how?

DILS should not React under Certain Circumstances

Once, while on a video call with my MIL, she remarked,”It’s been long since I saw you” (her tone hinted a bit of her annoyance)

She obviously meant that I am not talking to her often. You see, I am not a phone person basically!

So when something is not in my nature, what could I do?

I smiled off and stayed silent because I knew no amount of explanation from my end would make her see my situation.

The point is, though I did not talk back, my silence gave her my answer. Are you getting it? Every Situation does not require arguing/retaliation! 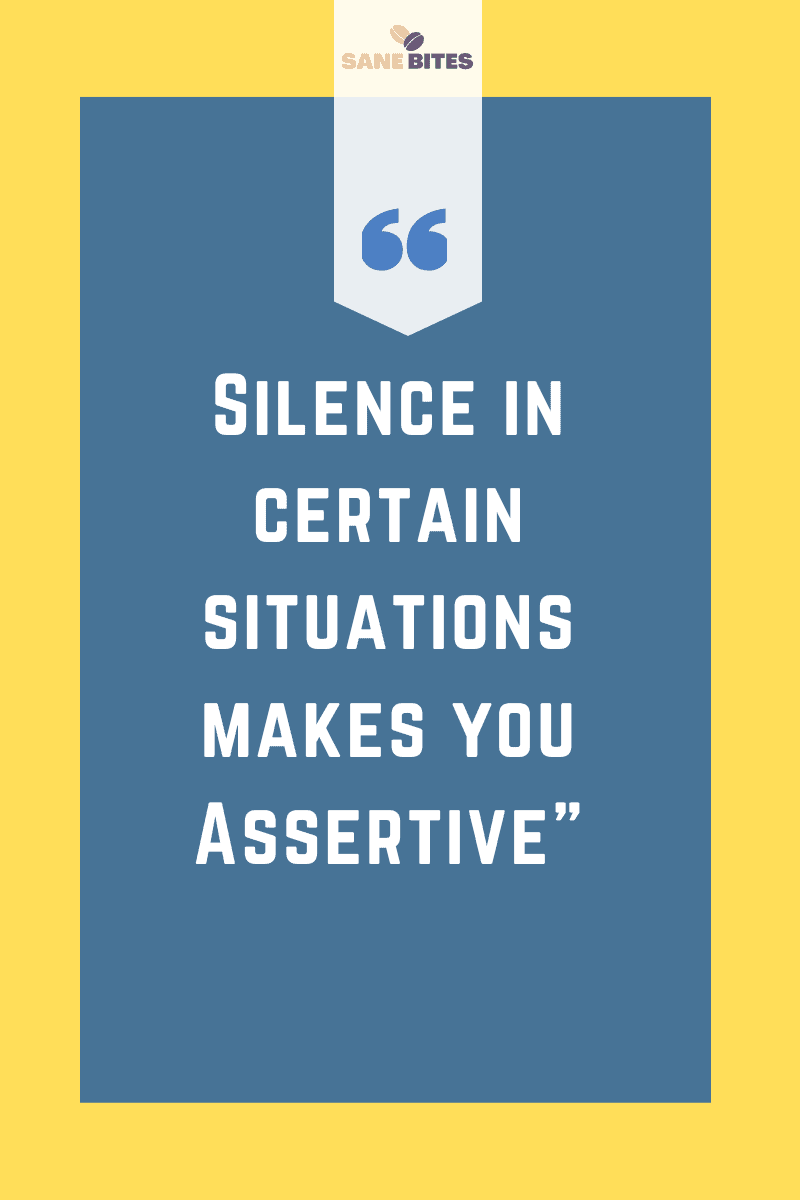 3. Daughters in law should Never become Aggressive Around Their In-Laws!

No matter how offended daughters in law are by their in-law’s behaviour, they should take charge of their temperament.

DILS should Take Stock of their Temperament

Once my sister in law intervened in a small argument that ensued between my brother and father.

By behaving the way she did, she earned a blot in her own Character.

In the same case, had she not lost her temper, wouldn’t things have been different? How bad that a single wrong move of hers downsized her own Dignity!

So at any point in time, it is important for the DILS to remember that how much ever antagonised they get because of their in laws, they should not lose their cool. If needed, they could put across their points assertively.

In the name of paving justice for themselves, they should not lose their themselves & their respect. 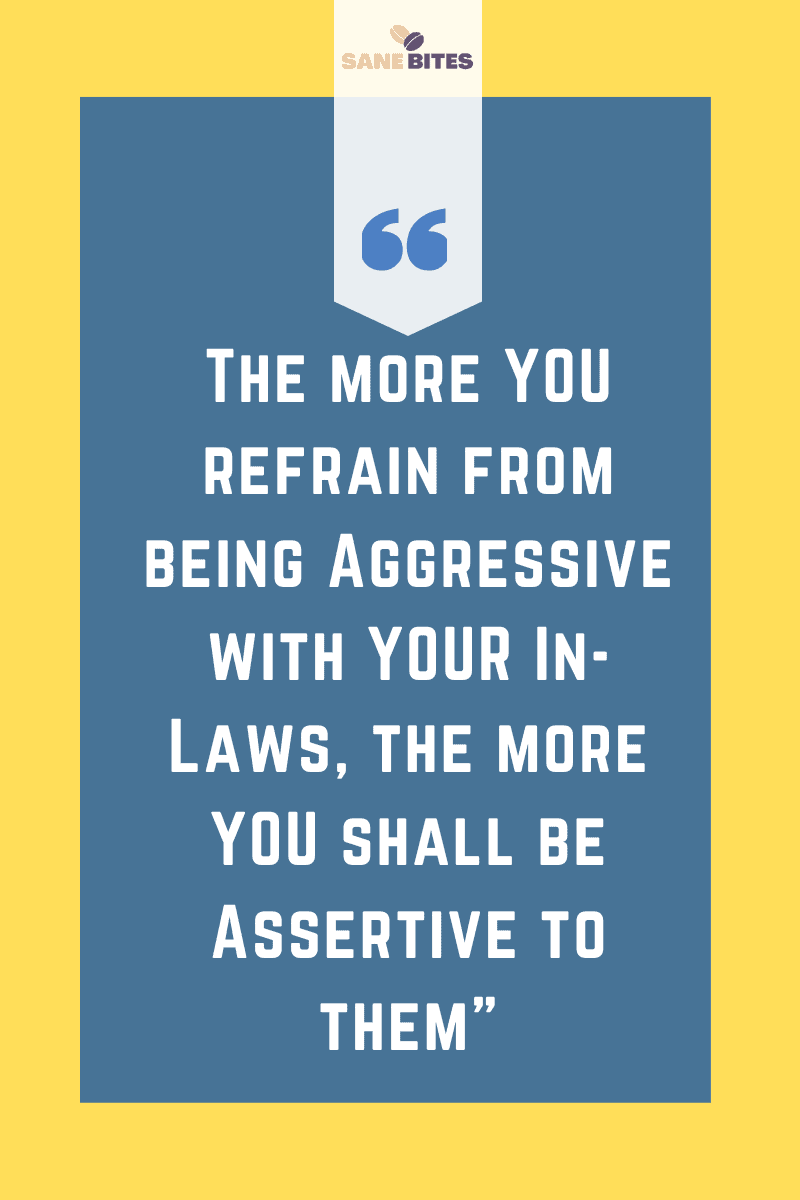 4. Daughters in Law should Never Deviate from the Subject of Discussion

A lot of familial arguments tend to amplify and end up creating a disaster when they keep happening endlessly. This is why daughters-in-law should never wander away from their point.

DILS should Stick to the Context of the Situation

Whenever daughters in law face issues with their in-laws, they should learn to address them in a way that they do not bring up subjects that are not appropriate to the Situation; neither should they entertain any form of irrelevance from their in-laws.

Possibly, they should stay in the Context and say, “Amma/Appa, why bring in the past? My point is So & So, so let’s just discuss the current subject and situation & arrive at a solution”

This way, daughters in law could save themselves from undue negativity and also be assertive. 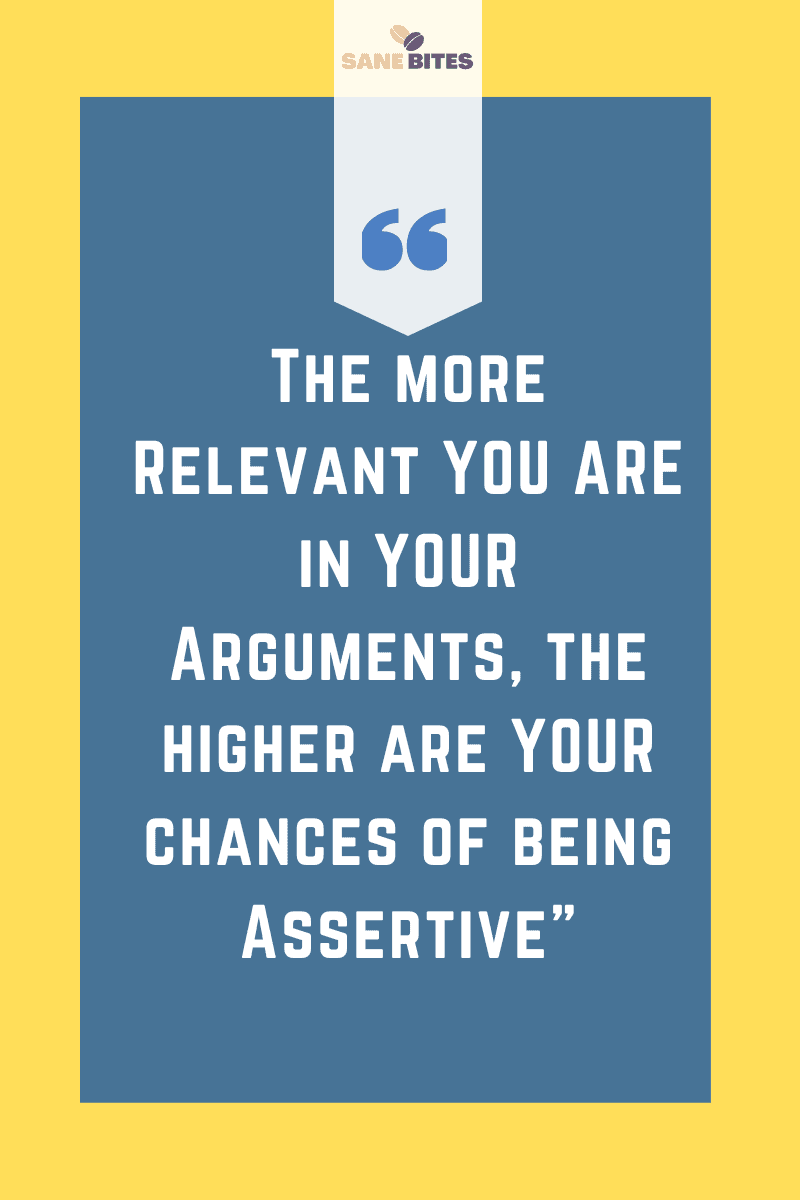 5. Daughters in law should be Aware of their Stand and Rights

As Grown-Ups, Daughters in Law should be take charge of their thoughts, interests, actions,and follow the natural law.

Meaning, they don’t have to seek their In-laws Approval for every little thing. By this, I don’t mean DILS should completely ignore their in-laws from their lives, NO. Just that certain decisions of theirs should solely depend on their interests. 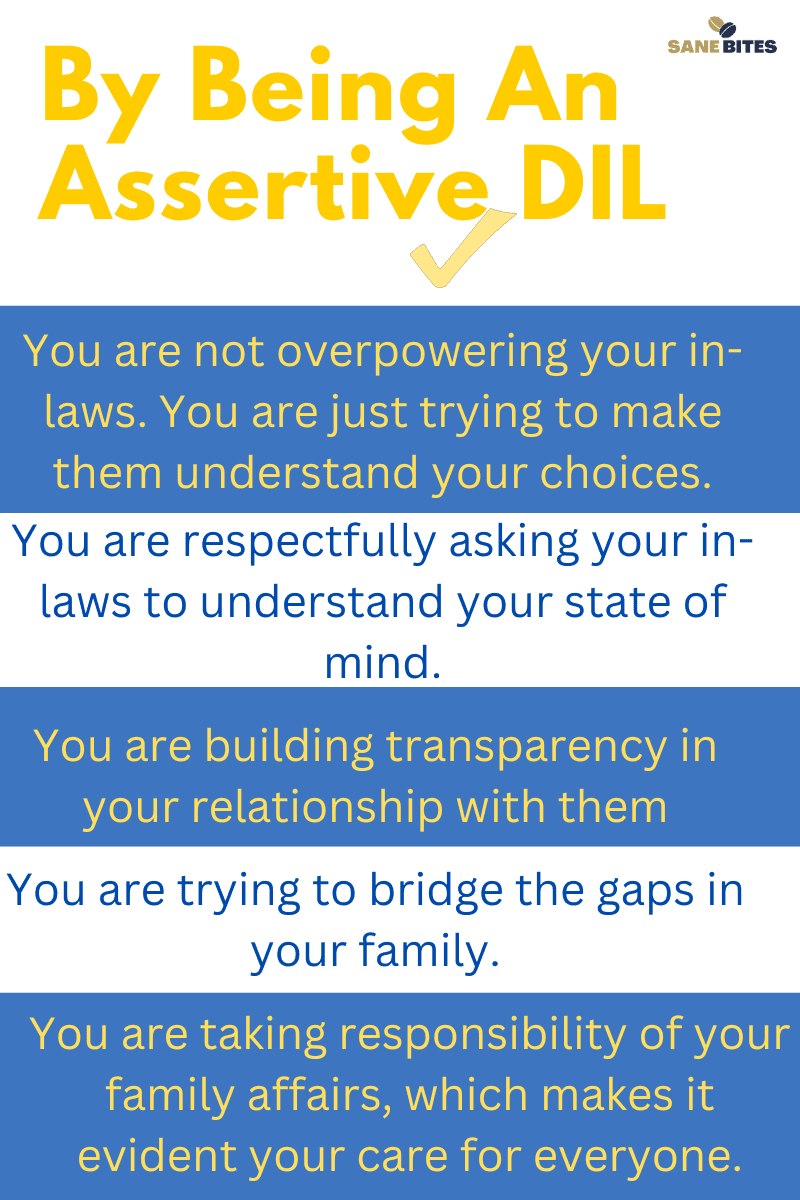 DILS Should Know to Make their Own Decisions

To add some clarity to my above point, consider this case. If a daughter in law intends to visit her parents OR take up Music Classes OR begin a career afresh, it is something pertaining to her interests/feelings, isn’t it?

This is where, she shouldn’t be asking, “Amma, Should I take up this offer?” ; instead, she should be bold enough to say, “Amma, I am planning to rejoin work from next month”

It should be an “information only” as long as the DILS’ decisions don’t affect their families in any way. And this automatically empowers them, thereby imparting assertiveness.

6. Daughters in law should Build their Confidence and Mold their Personality

Sadly, in India, most daughters-in-law don’t get their space to express themselves. All thanks to patriarchy.

On this note, I also want to press the point that DILS are also equally responsible for this situation. This, I believe, is owing to their wrong presumption that daughters in law should always remain Subservient to their In-laws, a myth we have to break at any cost.

DILS should Understand the Significance of their Body Language

This is a point where the daughters in law should start working on building a Confident Body Language for themselves. By this, I do not mean dils should take a disrespectful stance towards their in-laws. Just that they need to work to be more of themselves around their in-laws without any inhibitions.

By doing so, they develop courage to express themselves in a better manner.

In a Nutshell, building confidence bolsters every DIL’s Assertiveness. 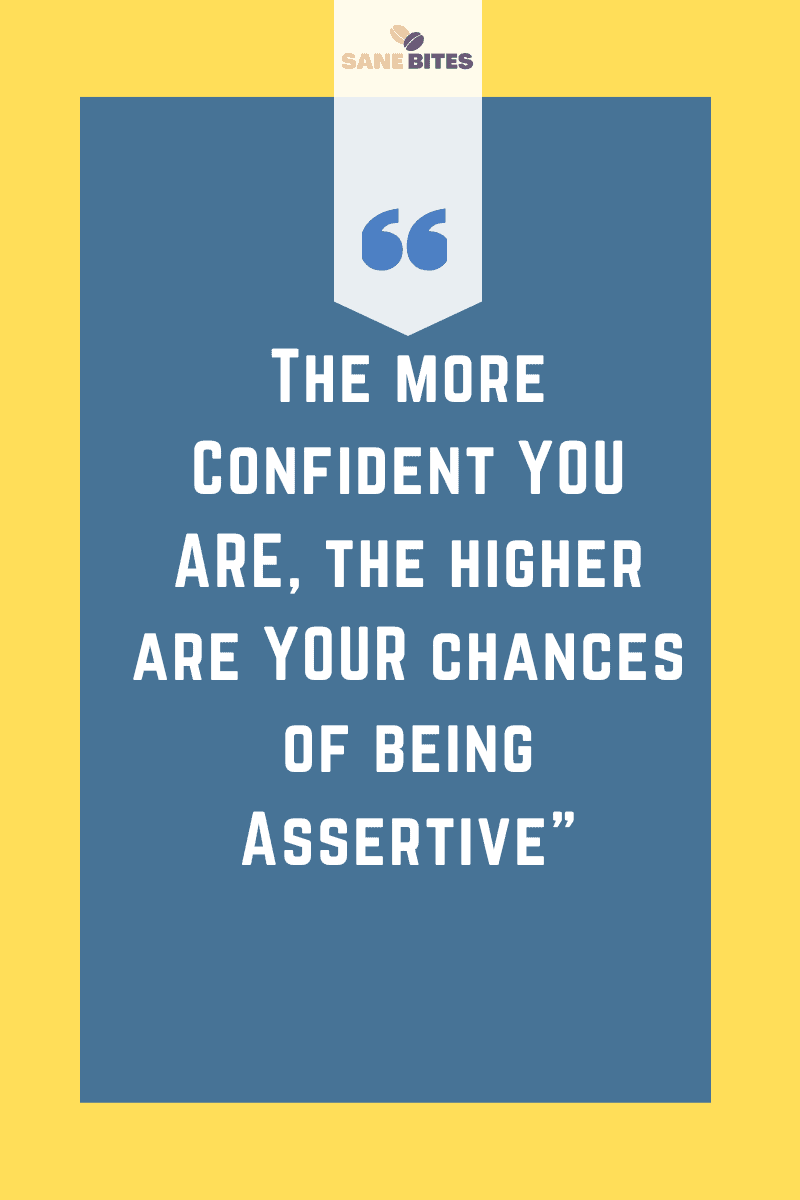 7. Daughters in Law should Explain themselves Patiently and Clearly

Many a times, Daughters in Law find themselves in a situation where their arguments start fizzling out soon after a hopeful start.

This could be attributed to their lack of Patience and Clarity in their Arguments.

DILS should Put Forth their Viewpoints with Clarity

No matter how complicated a discussion gets, it is important for the Daughters in law to stay clear in their view points. Consider this example –

Daughter-in-Law 1 – “I have some work to do, amma. I will wash the dishes later”

Clarity and Patience while handling the in-laws can make the daughters in law way more assertive as it ensures to keep their temperamental issues at bay. 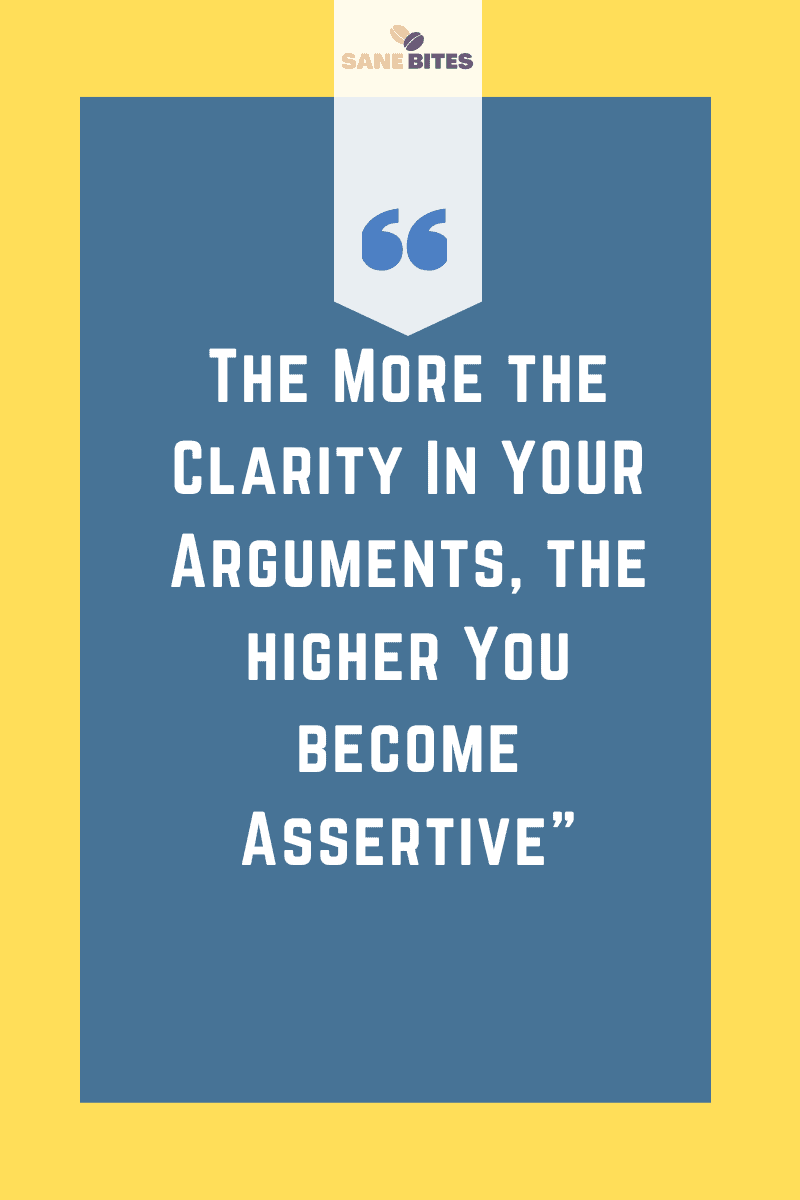 8. Daughters in Law should Set their Boundaries Clearly to Come Across as Assertive women!

Be it Gossips OR Uncalled for Subjects in Discussions, there is always CHAOS waiting readily to unleash itself.

In order to prevent such situations from happening, daughters in Law should be wise enough to choose whether they want to take part in a discussion or not.

Considering the kind of consequences that every small comment would incur, the daughters in law should be prudent and stay away from unnecessary discussions.

By exercising such an Attitude, daughters in law would not only end up building a respectable position for themselves, but also draw their boundaries clear. 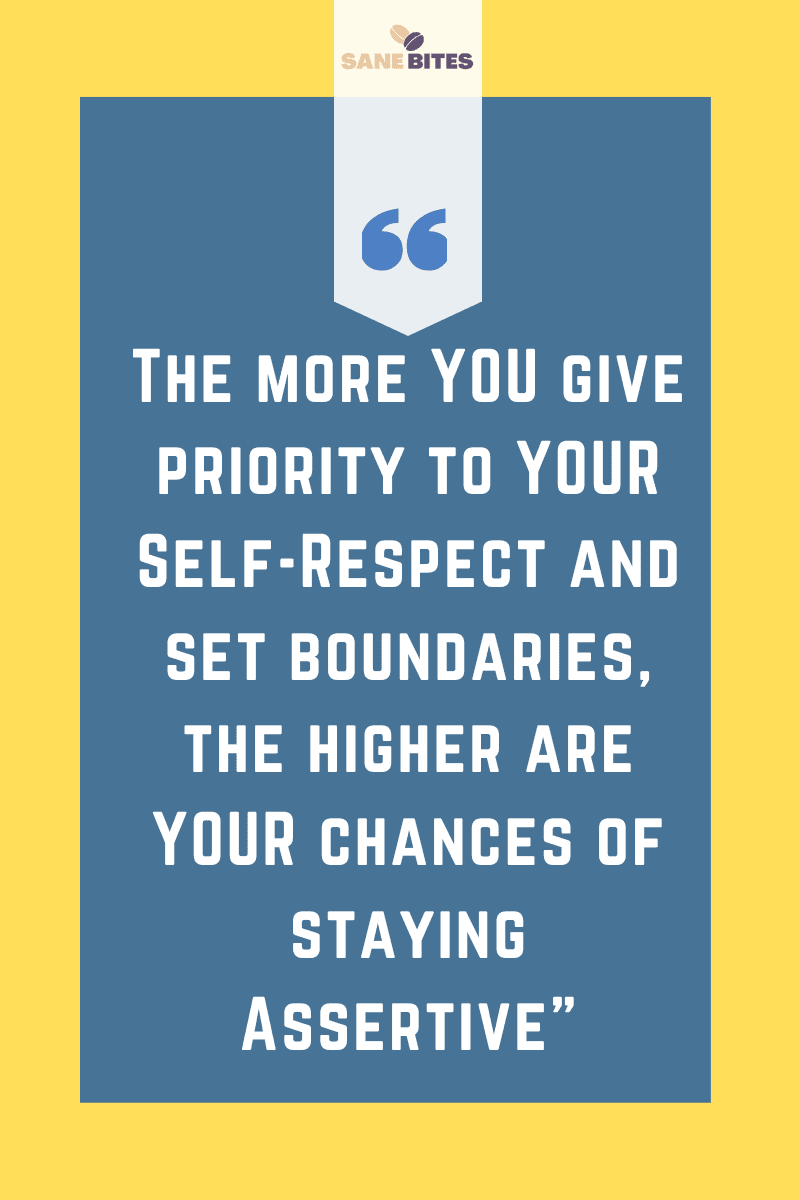 9. Daughters in law should Be Genuine

Daughters in Law’s Credibility play a major role in their discussions with the In-Laws.

By Credibility, I mean the Trust and Confidence In-Laws build on their Daughters in Law over time; and that is possible only when the latter stay honest, right and clear in their expressions.

Let’s say, a daughter in law argues with her in-laws for literally anything and everything. In that case, wouldn’t her in-laws deem her as someone really annoying all the time?

That said, when she actually sounds fair under a given situation, do you not think she would ignored by her in-laws considering the image she has built for herself?

So when daughters in law are being genuine in their relationship with their in-laws, they become naturally assertive. 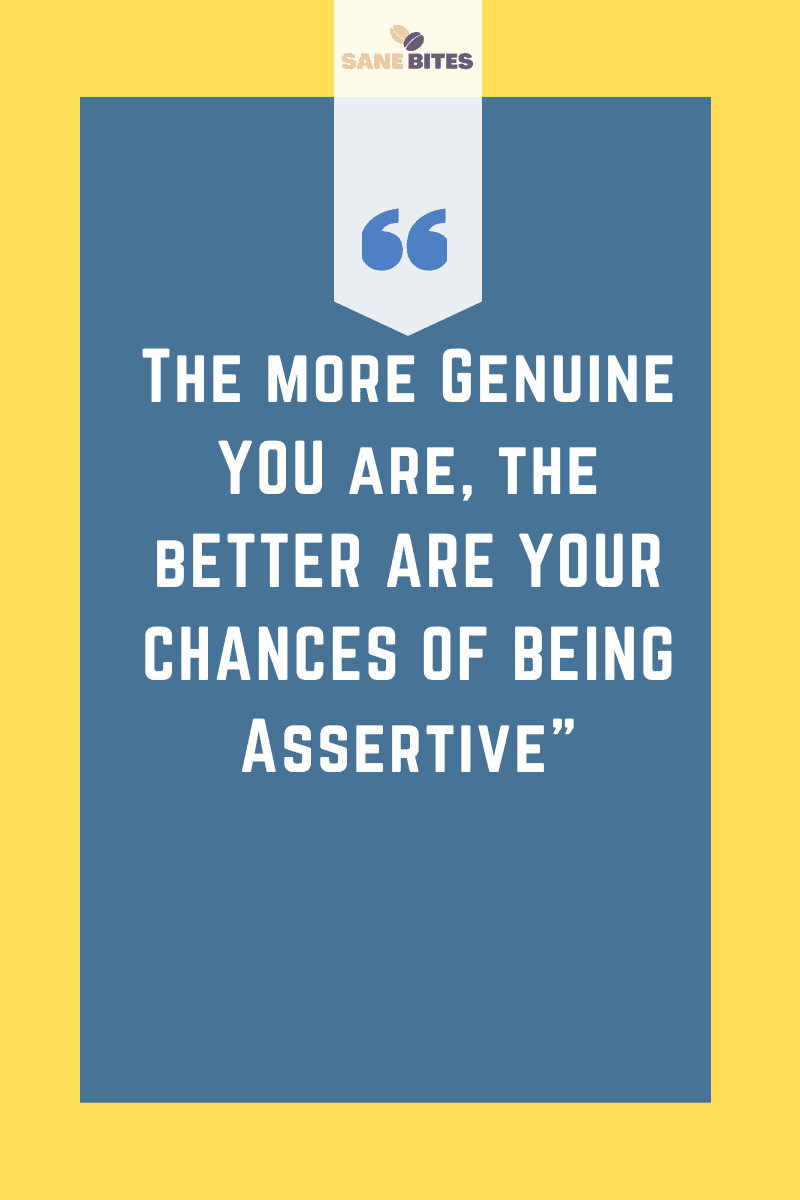 10. Daughters in Law Should Think Twice Before Speaking to their In-Laws

It is important for the Daughters in Law to take their time before they put out their points in discussions.

DILS should not Respond Instantly

Be it any family discussion, reacting/responding immediately would only make the daughters in law sound hasty and inappropriate.

It does not only weaken their stand in the discussion but also make them more vulnerable and ineffective.

On the contrary, when daughters in law allow themselves to simmer however intense the situations get, they could come up with better and stern responses, which would easily make them Assertive. 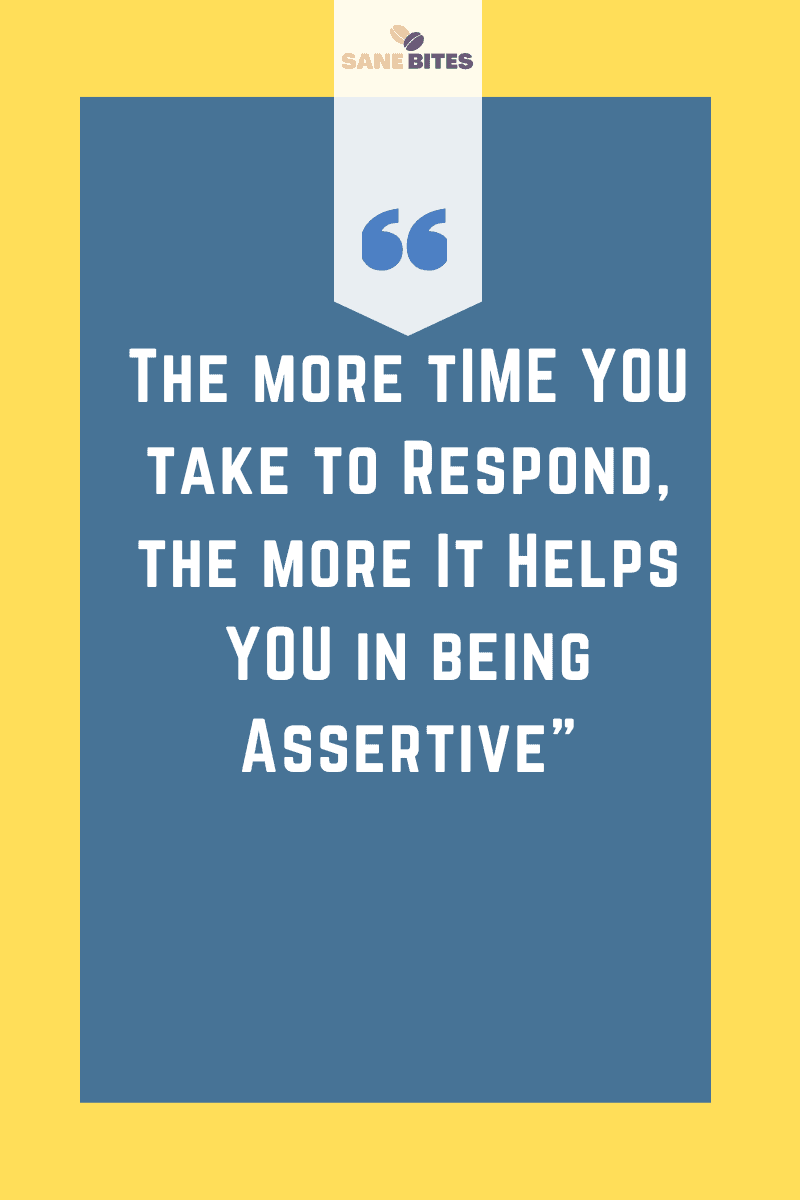 I hope you liked my blog. Let me know how these ways of being an assertive daughter in law helped you in the comments below.

Wishing you a lifetime of graceful relationship with your in-laws 🙂