Does Your Mother-In-Law Despise You?

What Are the Signs your mother in law doesn’t like you? Do you want to know what they are?

A number of things could reveal the distaste that your Mother in law holds towards you. As a daughter in law myself, I have compiled a list of them for you to follow. Come, let me walk you through them! 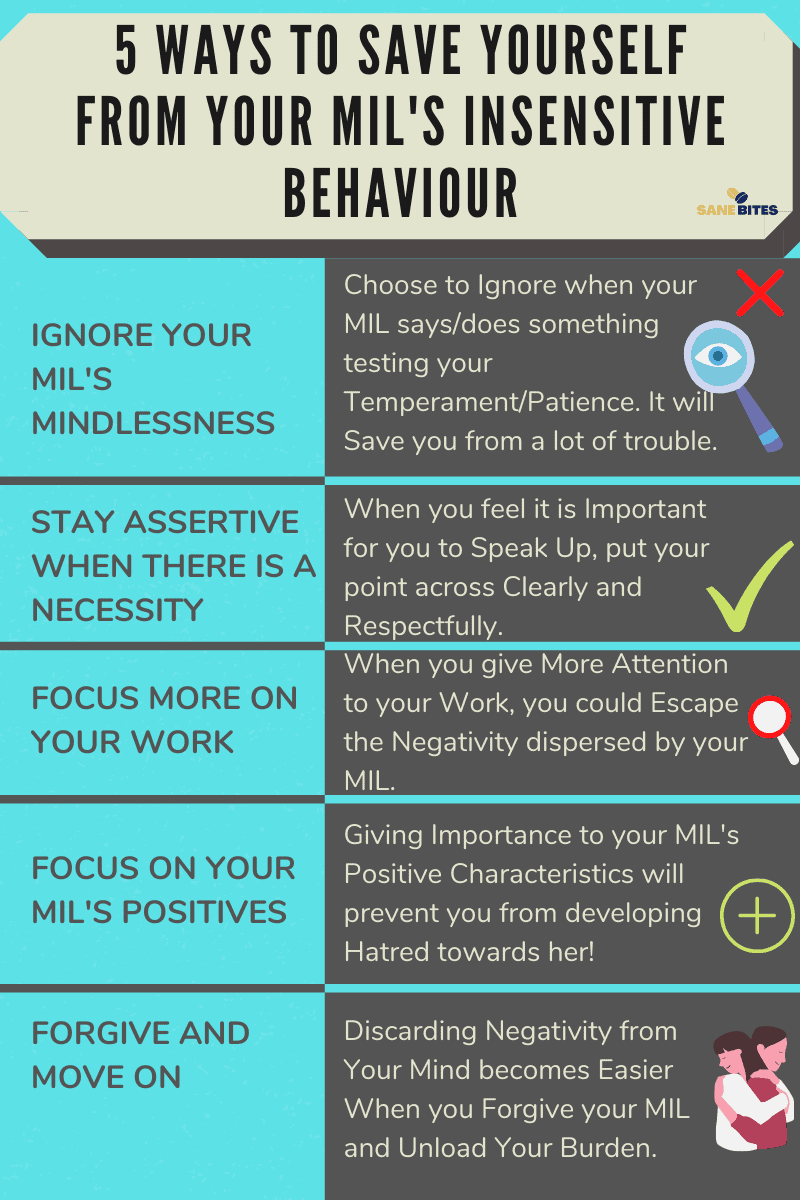 20 Evident Signs Your Mother In Law Doesn’t Like You

If the following signs get you closer to the truth that your MIL doesn’t like you, it is time for you to take charge of the situation. Here you go!

1. Does Your MIL COMPLAIN About Your Cooking Skills?

The DIL and MIL relationship always exists with a galore of differences and preconceived notions.

That said, do you always find yourself in situations where your MIL keeps degrading your cooking style?

Does she keep targeting even the tiny flaws in your cooking style though you don’t feel anything wrong with it?

An Article from Dailyhunt explains some of the real-life incidents on this ground of the patriarchy and the kitchen battle that happens between the MIL and DIL. This is something that caught my attention from the piece and I just wish every in-laws turn as broad-minded –

When you approach the kitchen with a hopeful heart of preparing the best food for your family members, wouldn’t your MIL’s insensible words hurt and demotivate you?

In that case, is that not one of the signs your mother in law doesn’t like you?

2. Your MIL Doesn’t Feel HAPPY When Appreciation Flows In For You

Say your relatives or friends visit home for dinner. And they are overawed by your demonstration of culinary skills and are happy to eat your preparation.

In such a case, a high-spirited mother in law would for sure, feel happy and excited for you and add a word or two to your credit.

On the contrary, how would you feel if your MIL looks displeased?

Or what if she demeans your work and says, “I can cook better than this. This isn’t a big deal at all”?

Does it not mean that your MIL is not fond of you?

Also Read: 19 Traits Of A Great Mother In Law

3. Does Your MIL IGNORE Your Suggestions All The Time – One Of The Important Signs Your Mother in Law Doesn’t Like You

Say there is a relative’s marriage around the corner and you, as a responsible DIL give a suggestion to buy a silver item as a presentation.

In such a case, how would you feel if your MIL intentionally brushes off the idea and makes you look unheard?

Wouldn’t her action offend you?

By ignoring you, Does she not make it clear that she doesn’t like you?

4. Your MIL BOTHERS You Intentionally

Say you have taken off from work for a day for relaxation. But to your agony, your mother in law keeps planting a lot of work on your schedule. Wouldn’t that piss you off?

Or say your MIL keeps beckoning you to do some work or the other and doesn’t allow you to settle in a place. Wouldn’t that frustrate you?

What if your MIL remains insensitive of your needs and keeps pressuring you with work intentionally?

5. Your MIL MOCKS At Your Way Of Doing Things

Obviously women follow their parents’ way of doing things even after their marriage because they have been with the latter for so many years. But what if THAT habit becomes a subject of mockery?

Say you temper the coconut chutney (a south-indian side-dish for rice-based items) with coconut oil (because your mother does) while your MIL doesn’t. And she mocks it by saying, “Who will add coconut oil to coconut chutney? I have never seen it elsewhere”.

In that case, how would you feel?

Or What if she makes fun of the way you call or pronounce certain things? Would that not upset you?

Do you not see this as one of the signs your mother in law doesn’t like you? How would you deal with such situations effectively?

6. You Come To Know That Your MIL Shares NEGATIVE Things About You With Outsiders

How would you feel if you come to know that your MIL shares bad things about you with her friends, neighbours, and family?

What if you come to see your MIL discussing bad things about you with her daughter?

Wouldn’t such instances displease you considering that your mother in law is character assassinating you behind your back?

7. Your MIL Doesn’t HESITATE To Put You Down In Front Of Others

Say you have guests or relatives at home. Your wily MIL doesn’t leave a chance to crush your image in front of them and humiliates you for not doing work properly.

Wouldn’t that leave you insulted?

Don’t such mindless actions indicate that your mother in law doesn’t like you?

8. Your MIL Takes A DIG At Your Spending Habits And Tags You IRRESPONSIBLE

Say you are a person who spends money on clothes though not a spendthrift.

In such a case, how would you feel when your MIL keeps pointing out that you spend a lot of money on clothes when you are actually being economical?

What if she keeps snapping you that you are being Irresponsible?

Wouldn’t her evident-less statements demoralize you?

Now tell me, is it not one of the signs that your mother in law doesn’t like you?

9. Your MIL Talks About ALLIANCES That Came For Her Son Earlier

Have you ever found yourself in situations where your MIL recounted to you about better alliances that came for her son before yours?

I had experienced this as a newly married DIL, when my MIL pointed out an alternate proposal which had arrived for her son while I was delaying my decision to say a yes. How could one even vent out their frustration through such sickening words? Especially after I became her DIL?

Do you not see this one of the ways for a MIL to show her disapproval towards her DIL?

10. Your MIL Finds FLAWS With Your Ways Of Upbringing Your Child

Do you often find your mother in law cribbing about the way you are bringing up your children?

Does she often find a reason to call you lethargic and irresponsible towards your children?

Only a daughter in law could understand such a feeling and I am sure such hostile situations created by the MIL just pinpoints her disfavour to her DIL!

11. Your MIL MANIPULATES Your Spouse Against You

Have you ever sensed your partner being influenced by your MIL?

Does he often take his mother’s side allowing you to fend for yourself?

Do you feel that your MIL uses your spouse to go against you?

If yes, it is one of the warning signs your mother in law doesn’t like you and it is time for you to confront the situation wisely!

12. Your MIL Passes UNDIRECTED Comments All The Time

Do you have a feeling that your MIL passes comments indirectly aiming at you?

Though it might not look obvious, does her words give away a hint that she is taking potshots at you?

If yes, it is cent percent evident that your MIL doesn’t like you! 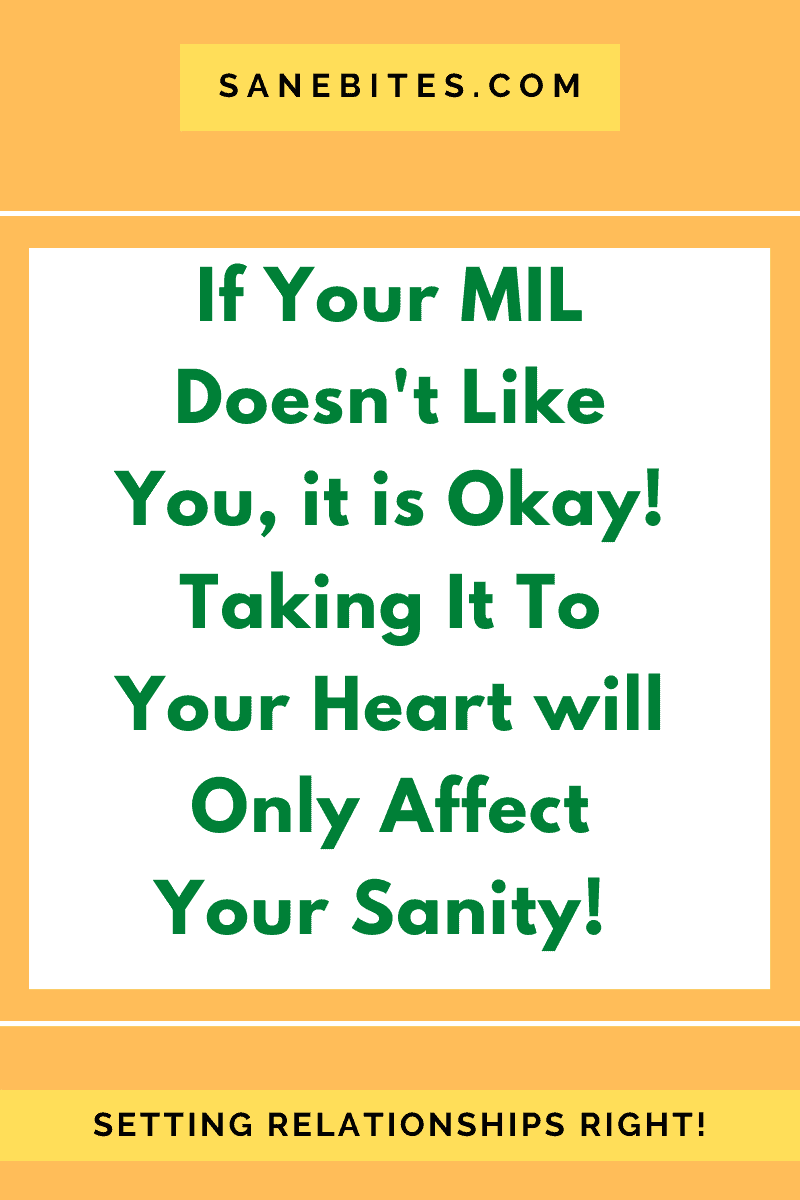 13. Your MIL Shows DISSENT When You Do Things For Your Parents

Say you present a saree for your mother on her birthday. In such a case, does your MIL grouse about the way you are doing things for your parents?

Does her actions and words evidently show that she is not happy about your gesture?

Remember, this could show that your mother in law is against your stance and discloses the fact that she doesn’t like you. On the contrary, an understanding MIL would accept your gesture heartfully!

14. Your MIL PROTESTS Against You Visiting Your Parents

How would your mother in law react when you inform her that you would be visiting your parents for a day or more?

Would she show her dismay and start grumbling about your frequent visits to your parents’?

In the same case, contrarily, had your MIL been sportive and concerned, wouldn’t she have accepted your information with a broad-mind?

Does it not mean that your mother in law doesn’t like you?

15. Your MIL COMPLAINTS About You To Your Parents

Is your mother in law crooked enough to make complaints about you to your parents?

Does she often come up with a list of flaws she finds in you when she meets your parents?

If yes, isn’t her action reflective of her displeasure over you?

How could a MIL remain insensitive to her DIL’s feelings like this?

I literally wonder when such people would even grow up!

16. Your MIL Demeans YOU Of The Way You Dress Up

Probably you are someone who is more westernized and prefer wearing jeans to salwar suits. In such a case, does your MIL take a dig at your clothes and make-up?

Does she humiliate you just because you dress up the way you prefer to not complying with her mindset?

Is her thought even fair enough?

Had your MIL been a loving one, wouldn’t she accept you the way you are?

17. Your MIL Cannot Stand IT When You Give Importance To Your Parents

Say there is a Function at your parents’ place and you work a lot for it like always.

In such a case, how would you feel if your MIL points out, “Look at my DIL. She will strain hard for her parents, and family and not for her marital home.”?

Wouldn’t that annoy you especially when you give your heart and soul while helping your in-laws too?

How baseless is her remark? Do you not see this as one of the signs your mother in law doesn’t like you?

18. Your MIL Tries To OVERPOWER You

Do you find your mother in law controlling you all the time?

Does she not care about your independence and space?

Say you wish to go to a friend’s place while she stops you from doing it citing some baseless reasons. Wouldn’t that frustrate you?

Aren’t her actions intentional and insensitive to your needs in such a case?

Had she been an understanding MIL, would she even try to control you? Does it not reveal the fact that your MIL doesn’t like you?

19. Your MIL Finds Flaws With The Gift You Get For HER

Say you get your mother in law a saree for her wedding anniversary. In that case, how would you feel if she disappoints you through her not-so-happy face?

What if she points out that she doesn’t like the fabric and color?

Wouldn’t such a remark hurt someone who has bought the gift with a happy heart?

Does it not give away the fact that your MIL doesn’t like you?

20. Your MIL Keeps Comparing YOU With Her Daughter

In India, it is not out of the ordinary to find MILs shaming their DILS by comparing them against their evergreen-adorable-daughters!

That said, wouldn’t it annoy a DIL if she is being demeaned in the name of her sister in law?

How could mothers in law even resort to such practices considering that their DILs could never be their daughters?

Had it been you in a spot, how would you feel? Do you not see this as one of the ways a MIL vents out her displeasure over her DIL?

When would such situations change for the better?

Holding diverse differences with the DIL is okay but what if it leads to a bitter relationship for the MIL to deal with?

At least if the MIL could try to maintain a balanced relationship with her DIL without hurting the latter’s feelings and needs, wouldn’t that aid their relationship in the long term?

What is your take on this? Share your thoughts in the comments section below!

Also Read: 9 Secrets To Building A Good Relationship With Your Mother in law