Does Your Mother in Law Qualify As Being a Really Great One?

It isn’t every day that you get to observe the traits of a great Mother in Law. But when you do, the first thing to pursue is gratitude for the woman who’s been an inspiration.

As a daughter in law, I can list so many inspiring qualities of a great mother in law. In fact, more women have to take precedence and follow them.

After all, it doesn’t just take a daughter in law to bind a family. What is needed surely is an effort from all sides. Also lots of empathy and compassion. 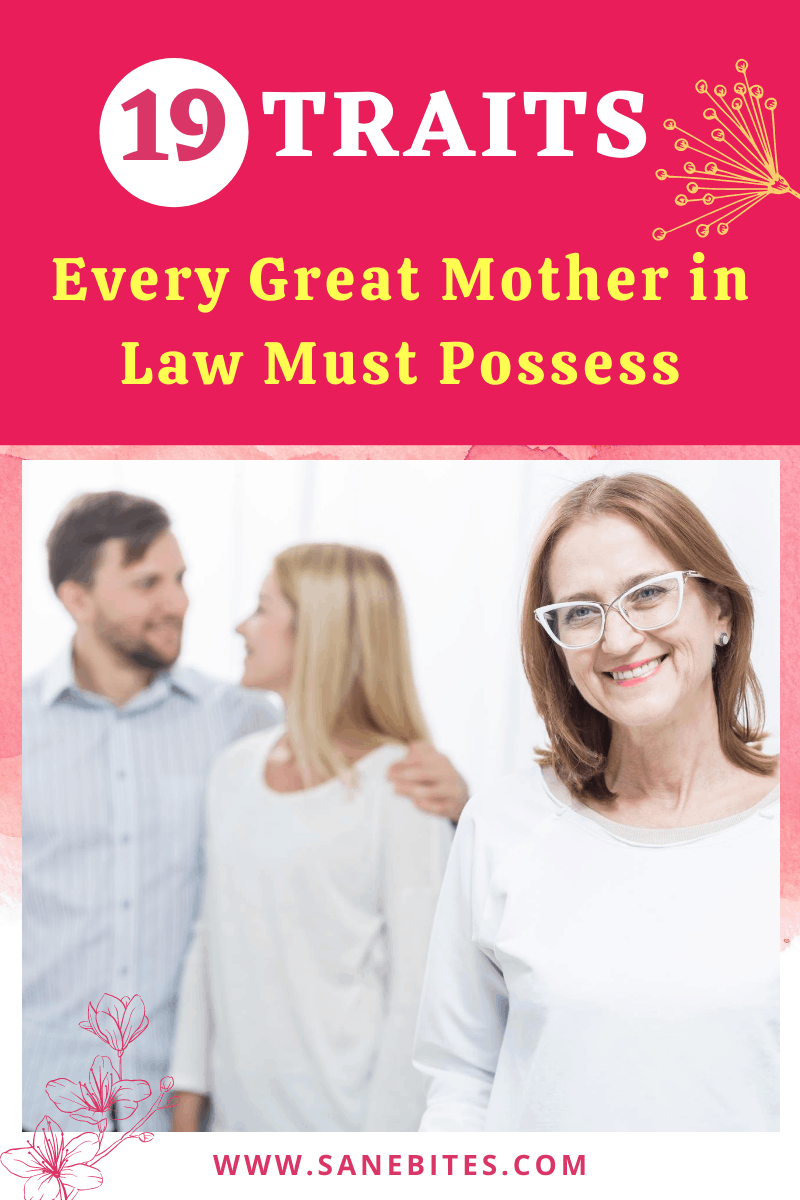 |ALSO READ : HOW TO SHARE A GOOD RELATIONSHIP WITH YOUR MOTHER-IN-LAW? |

While it would be unfair to label all mothers in law as bad women, it is very rare to come across mothers in law who are an inspiration. Below, I share with you the 19 most important traits of a good Mother in Law!

Marriage is a new beginning and quite a drastic change for a woman. This change can be daunting for a woman especially if she is moving in with her husband’s family.

I believe that it is the duty of a good mother in law to be kind and welcoming to the new bride. Afterall, who can understand the change better than she does, she was once in the same shoes.

Nothing is more comforting to a newlywed bride than a woman who welcomes her into the family with an open heart. A great mother in law will ensure that you are comfortable in the new setting and feel at home.

2. If She Encourages You in All Pursuits, She Is an Excellent Mother in Law

So, whether it is supporting her huge decision like a career move or something as small as changing the living room furniture, she’s got your back.

Having a supportive mother in law who respects the dreams and wishes of her daughter in law can bring in joy and positivity not only in the life of the daughter in law but also to the whole family.

3. She Doesn’t Hesitate to Be the First One to Open the Channel of Communication When There’s a Misunderstanding

It’s no hidden fact that communication is the key to every successful relationship. This rule applies to a mother in law – daughter in law relationship as well.

4. A Great Mother in Law is Collaborative, Not Competitive

A great mother in law is a secure woman. She will never try to sabotage or outperform her daughter in law.  In fact, she would offer to help and collaborate with her to get the best out of the situation.

|ALSO READ : WHY SHOULD MILS STOP COMPETING WITH THEIR DILS? |

5. The Most Amazing Quality of a Great MIL is that She Practices What She Preaches

Another indisputable trait of a great mother in law is that she practices what she preaches. She does not have a separate set of rules and values for herself and for others.

If a mother in law believes in the fair treatment of all and treats her daughter in law as a second class citizen, she definitely needs to dig in more deeply into herself.

6. A MIL Who Respects & Tries to Understand Her DIL as a Woman First, is Amazing

A great mother law would always want to establish a relationship with a daughter in law that is independent of her son. She tries to connect with her on a woman to woman level.

This creates a deeper level of understanding between the two women which is healthy, non-judgemental and bias-free.

7. A Great Mother in Law Graciously Accepts the Change in the Relationship with Her Son, Post Marriage

A mother-son relationship is very special and sometimes it makes it difficult for mothers to let go of their sons. In fact, research has found out that mothers have the DNA of their sons forever “stored” in their brains.

I have seen so many women struggling so hard with this. As the mother of a son, who has just gotten married, the hardest and the most important part is letting go and understanding that her relationship with her son has changed.

A good mother in law understands that after marriage, her equation with her son has changed. She respects the relationship between you and your husband. She slowly steps out and allows her son to move ahead and concentrate on his own family.

8. A Good Mother in Law Tries to Catch up With Changing Times

Times are changing and so are the dynamics of relationships. A distinguishing quality of a good mother in law is her ability to change with changing times.

A great mother in law tries to keep herself up to date with the ways of the world. She tries to understand the implications of change and tries the best to keep up, to strengthen her relationship with the son’s family.

For example, a good mother in law would never expect her daughter in law to curtail her freedom or discourage her career advancement, to fulfill her domestic duties.

9. A Great MIL Doesn’t Force Herself on Her DIL

It goes without saying that every great mother in law needs to understand and respect the differences between herself and her daughter in law.

A great mother in law is not the one who tries to be a best friend to her daughter in law. She is mature enough to form a respectful and meaningful relationship with her without overstepping her boundaries.

If a mother in law ties her self esteem to validation by you, it is definitely not a good sign for your relationship in the long run.

10. If She Doesn’t Force You to Adopt Her Traditions and Customs, She is a Wonderful Mother in Law

Some mothers in law put their daughters in law under too much pressure of following a certain set of traditions and customs.

A great mother in law is one who does not force her religious beliefs, practices, traditions, and customs upon her daughter in law.

11. A Considerate MIL Doesn’t Expect You to Be a Stereotype

I have personally come across many women who force their daughters in law to be a certain way and behave a certain way, and I think this is completely unacceptable.

If you are a type of MIL who expects her DIL to stick to a certain, stereotype, you sure are doing no good. The only good you’ll be contributing to is patriarchy.

12. A Mother in Law that Follows a No-Discrimination Policy is a Woman Who Deserves Your Love & Respect

One of the most defining traits of a great mother in law is that she does not discriminate between her son and her daughter in law. A good relationship should not have any scope of bias.

It is natural for a mother to favour her own child over others. However, once the child is married, their spouse becomes an important part of their life. A good mother in law acknowledges this and keeps both the husband and wife at the same pedestal. 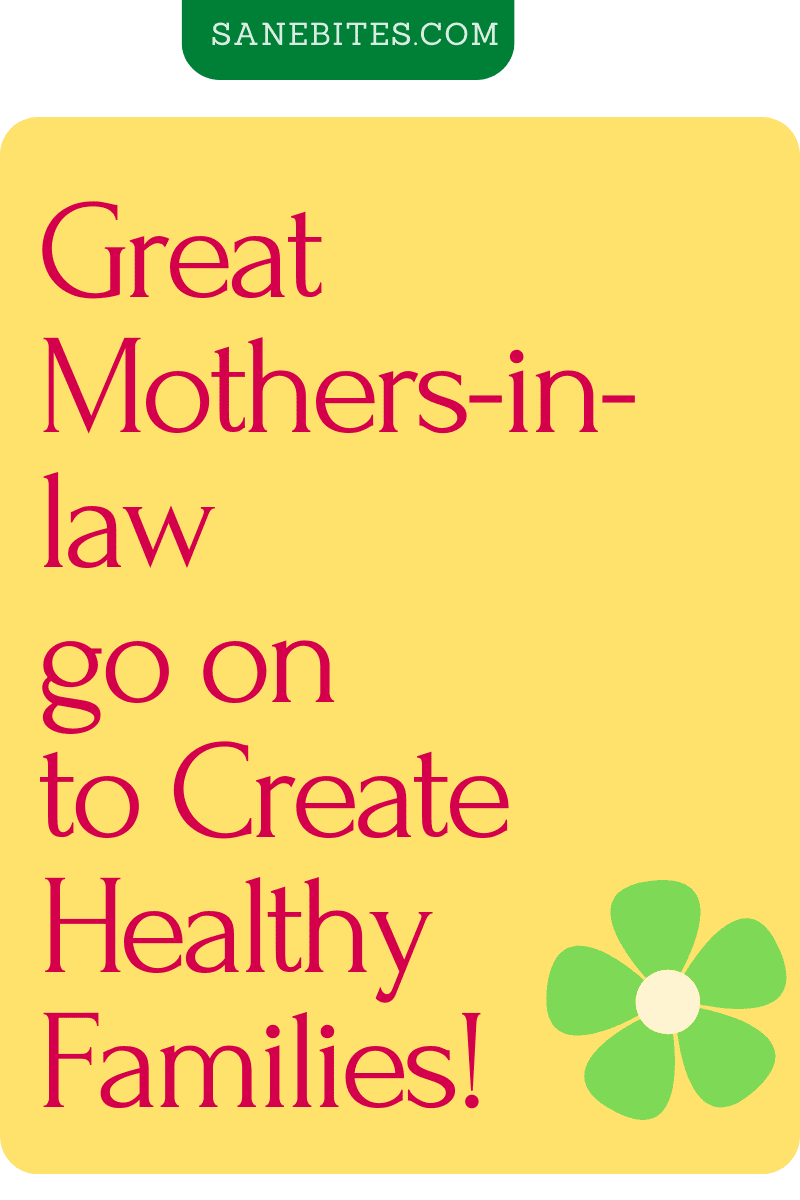 13. A Good Mother in Law Would Never Compare You to Her Own Children

As much as people might debate, the truth is that a daughter in law is not a daughter. A good mother in law understands and respects this fact.

A good mother in law would never compare her own children to her daughters in law. Don’t you think having the same level of expectation from a daughter in law is unfair to her?

14. A Good Mother in Law Doesn’t Interfere in Your Parenting Style

Grandmothers can be very attached to their grandchildren, but they have to realize that they aren’t their mothers. The onus of raising the children lies completely on the parents, and while the grandparents can assist in that, they must not interfere.

A good mother in law would not interfere in your parenting style. She respects you as a parent and allows you to make all the important decisions of your child’s life.

Most importantly, a good mother in law would never undermine your authority, especially in front of the children.

15. A Thoughtful MIL Provides Ample Space for You to Go About Your Daily Life

One of my friend’s MIL rearranges her whole kitchen when she is visiting. She points out all the ‘wrong” things she is doing and tries to “fix” them. If you are a mother in law reading this, take note, that is definitely not a trait of a good mother in law.

A good mother in law is one who accepts your lifestyle and doesn’t try to change it. She gives you and your husband ample space to follow through their own lifestyle and choices.

She doesn’t bother you with the unnecessary sermons on how to go about your life. She lets you be independent and trusts you with your decision-making abilities.

16. A Good Mother in Law Doesn’t Speak Negatively About Her Daughter in Law to Others

Many mothers in law are in the habit of spreading negativity and bad-mouthing their daughters-in-law in front of others. A good mother in law would never indulge in this type of behaviour.

17. A Mother in Law that Remembers Important Days and Events in your life, is the Best

A Great mother in law will always remember the important days and events in your life. She is not pushy but definitely makes an effort to be a part of your life.

She sends her best wishes on your birthday, follows through with the results from a doctor’s appointment, and congratulates you on your professional achievements.

For an evolved mother in law, you are an important part of the family independent of her son.

18. A Great Mother in Law Is Not Preachy and Gives Advice Only When Asked

Some mothers-in-law are in the habit of excessively being preachy and giving unsolicited advice. They constantly try to meddle with your married life and try to impose their opinions on you.

A good mother in law knows her boundaries very well.  Despite being a part of your life she maintains a respectful distance and refrains from passing judgments and giving you advice on conducting your everyday business.

A great mother in law will offer advice only when you ask her for it.

19. Blessed are the Women Whose Mothers in Law Offer a Helping Hand in Difficult Times

Blessed are the women who have an understanding mother in law who are always willing to help you out in a difficult situation.

Whether it is the last minute planning of a family gathering or offering to babysit your children on a busy day, a great mother in law is a woman you can count on to have your back.

These, according to me are the 19 most inspiring traits of a great mother in law. If you have something to add to it, feel free to do so in the comment section below. I would love to hear your thoughts.