Check Out For These 5 Healthy Traits In Your Family!

Are you wondering what are the 5 traits of a healthy family?

If you are someone who wants to check out your family’s well-being and stability levels, you have come to the right place. Come, let me help you! 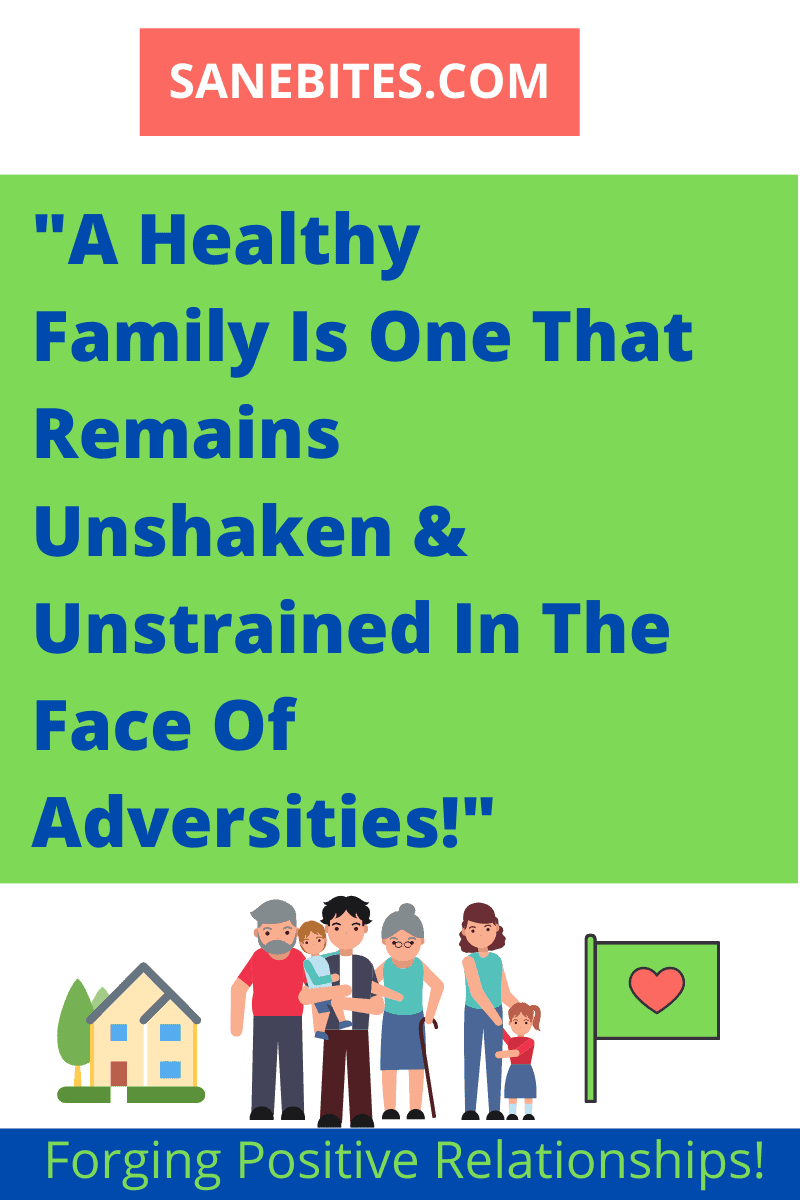 What Are The 5 Traits Of A Healthy Family – One-Stop Blog To Ensure Your Family Stability!

No family is rid of differences, arguments, fights, and cold war. But a healthy family would escape unhurt all such odds.

Instead of the family members fighting out with one another all the while, in a healthy family, despite existing differences, every member would ensure the smooth functioning of their homes. How?

Let me give you 5 secret traits of a healthy family that makes it stand out from the rest. Here you go –

Come, let’s discuss them in detail!

1. In A Healthy Family, Members Make Adjustments & Have A Good Understanding Of One Another!

A collective family runs swiftly only if there is an understanding between the family members.

Let’s say you don’t like brinjal gravy. Knowing this, if your mother-in-law prepares you an alternate potato gravy, isn’t that a beautiful gesture?

You don’t have to tell her every time that you don’t like this and that. She just knows it and does your favourite as well in addition.

Here, do you see the understanding that the MIL has towards her DIL?

I have written a blog on 19 Traits Of A Great Mother-In-Law which you might find interesting. Check it out if required!

Suppose it’s a Sunday and you wake up late in the morning. And you don’t feel like cooking.

Having worked tirelessly all week long, you want to take ample rest as possible.

Waking up you realize that your spouse has prepared everything for breakfast. How would you feel? Amazing, isn’t it?

Without you asking him to do anything, if he has made efforts to cook for you, shouldn’t you appreciate his “tacit understanding” with you?

You have planned for a movie with your partner while you spot the latter preoccupied with some official work.

Quickly, you cancel the tickets and let him do his work without picking a fight with him for not giving importance to your plans.

In that case, don’t you think your gesture is an “act of extreme maturity and understanding”?

Say you spot your father-in-law going restless after coming home from work.

It is past his dinner time and you UNDERSTAND the reason behind his behaviour; His hunger pangs!

Instead of reacting, you go on to arrange his dinner and let him unwind. In that case, isn’t your move healthier enough?

The above 4 scenarios talk about the Adjustments and understanding that family members have for one another in a healthy family. Do you understand its significance?

2. In A Healthy Family, Members Are Respectful Of One Another & Loyal To Their Family!

What Are The 5 Traits Of A Healthy Family? – No matter what, staying respectful of one another is a norm in a healthy family.

A husband would respect his wife rid of patriarchal ideas;

A mother-in-law would treat her daughter-in-law respectfully without any gender bias;

A father-in-law would approach his entire family with respect;

A wife would accept her in-laws and spouse whole-heartedly and behave respectfully with them;

A family without respect will fall apart, becomes disintegrated and less healthy. Is that even desirable?

In a healthy family,

A mother-in-law would handle her daughter-in-law politely;

A daughter-in-law would talk to her mother-in-law with enough respect.

In the presence of outsiders as well, they talk and behave gently with one another.

Safeguarding One Another From Outsiders Is A Part Of Healthy Family

Let’s say a bunch of insensitive relatives makes a situation dreadful for a daughter-in-law.

They criticise her culinary skills and put her down as much as possible.

In such a case, members of a healthy family would never even allow such a situation to arise.

They stand like a rock by their family member and protect her against unnecessary barbs and taunts from outsiders; Be it the spouse, mother-in-law, or the father-in-law.

At any cost, they would not allow their family members to be accosted by strangers!

When family members take their home-matters outside their family, isn’t that a bad move?

However complex OR annoying the situations are when internal affairs at home make an exit, they are signs of an unhealthy family!

Back-biting and bad-mouthing don’t happen in a healthy environment!

3. Maintaining Boundaries With One Another Is A Convention In A Healthy Family

In-Laws would very well maintain their boundaries with their son and daughter-in-law, respecting the privacy of the husband and wife duo.

A daughter-in-law would exercise her behaviour appropriately with her in-laws; She would never try to impose her thoughts on the latter.

So, What Are The 5 Traits Of A Healthy Family?

Everyone’s Space Is Respected In A Healthy Family

Neither the in-laws nor the DILS would dare to overpower OR control OR interfere with one another. They make certain to give each other their space to let the family stay functional and happy.

If a daughter-in-law decides to pursue her career, her in-laws would stay supportive of her;

If a son decides to move abroad, his parents would be encouraging of him;

On the whole, family members ensure that they don’t play a spoilsport to others’ happiness in the family and facilitate a stranglehold-free ambience. Isn’t that phenomenal

4. Sharing Responsibilities & Staying Supportive Of One Another Is Common In A Healthy Family

The word “Joint” in the term Joint-Family in itself means that the members of the unit have to participate in every responsibility of the family.

Be it the domestic responsibilities OR taking care of the finance, all the members need to take part and contribute their best.

So, What are the 5 traits of a healthy family?

In a healthy family, a mother-in-law would never burden her daughter-in-law with all the domestic duties. If the MIL does the cooking, the DIL would take care of the cleaning activities. That is how it works.

A father-in-law would never make his son take the onus of financial management of the house; He shares the responsibility together with his son!

Suppose your mother-in-law is not keeping well. You have your children to take care of, office work to handle despite the regular household chores.

On top of this, if such a situation comes up, it would definitely be daunting. But still, you choose to make the obstacle your strength. You take care of your mother-in-law well.

And most important of all, you carry out your responsibility with utmost sincerity and the love you have for her; For you know for sure that your MIL would never let you down if you are not keeping well.

Rigid in the face of crisis – That is how a healthy family looks!

5. Healthy Discussions & Arguments Are A Part & Parcel Of A Healthy Family!

A bond is never formed without the parties concerned opening up to one another, isn’t it?

That is why a healthy family rings of open discussions and arguments.

Sharing Things Is A Sign Of Trust In A Healthy Family

When a wife shares the problems she faces with her in-laws openly to her spouse, isn’t that a good thing?

She doesn’t have to think what her spouse would think, because he assumes the responsibility of a good partner.

Similarly, when a mother-in-law subtly advises her daughter-in-law to understand the importance of saving money, she assumes the role of an elder. What is wrong in that?

She knows her daughter-in-law wouldn’t mistake her and as a mother-figure, she carries out her duty responsibly.

In what way could she be blamed?

Who Said That A Healthy Family Is Rid Of Anger & Arguments?

When a daughter-in-law expresses her dissent over her mother-in-law doing so much work despite her ill-health, isn’t she being fair?

Her mother-in-law might not buy it arguing back that she is doing well.

Don’t you think such discussions are healthier?

Also Read: 9 Secrets To Building A Good Relationship With Your Mother-In-Law

When a wife is being harsh with her spouse for conversing with his relatives who were bad-mouthing him, what is wrong in it?

Each members’ perception of people and things might differ and arguing about them openly is a way to let go of their frustration and instill peace in the family. Don’t you think so?

Decision-Making Is Done Together In A Healthy Family

Be it planning a vacation OR deciding on which TV to buy for the house OR purchasing a land, if all the members of the family come together to discuss, taking into account everyone’s suggestions, it is a sign of a healthy family. 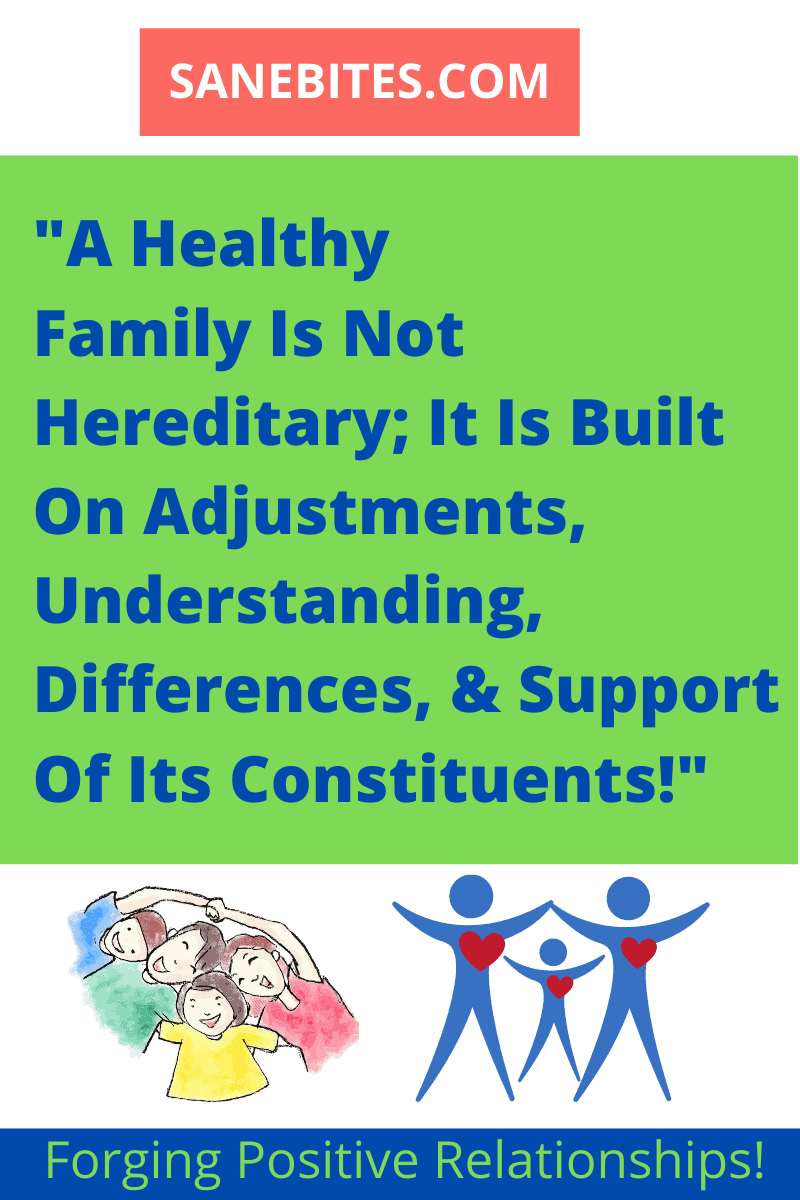 A healthy family is not ideal; It evolves with time. Yours could become one too, only if you give more room to your family members, stay broad-minded and practice compassion all along!

What is your take on this? Share your thoughts in the comments section below!