Dear DIL, Do You Feel Unheard And Unnoticed By Your In-Laws?

Are your in laws ignoring your needs? Has this feeling been bothering you lately?

Most of the daughters in law feel withdrawn and overlooked in their marital homes as their in-laws knowingly or unknowingly fail to take notice of the latter’s  requirements and needs. What are the signs that tell you so?

Come, let’s check them out! 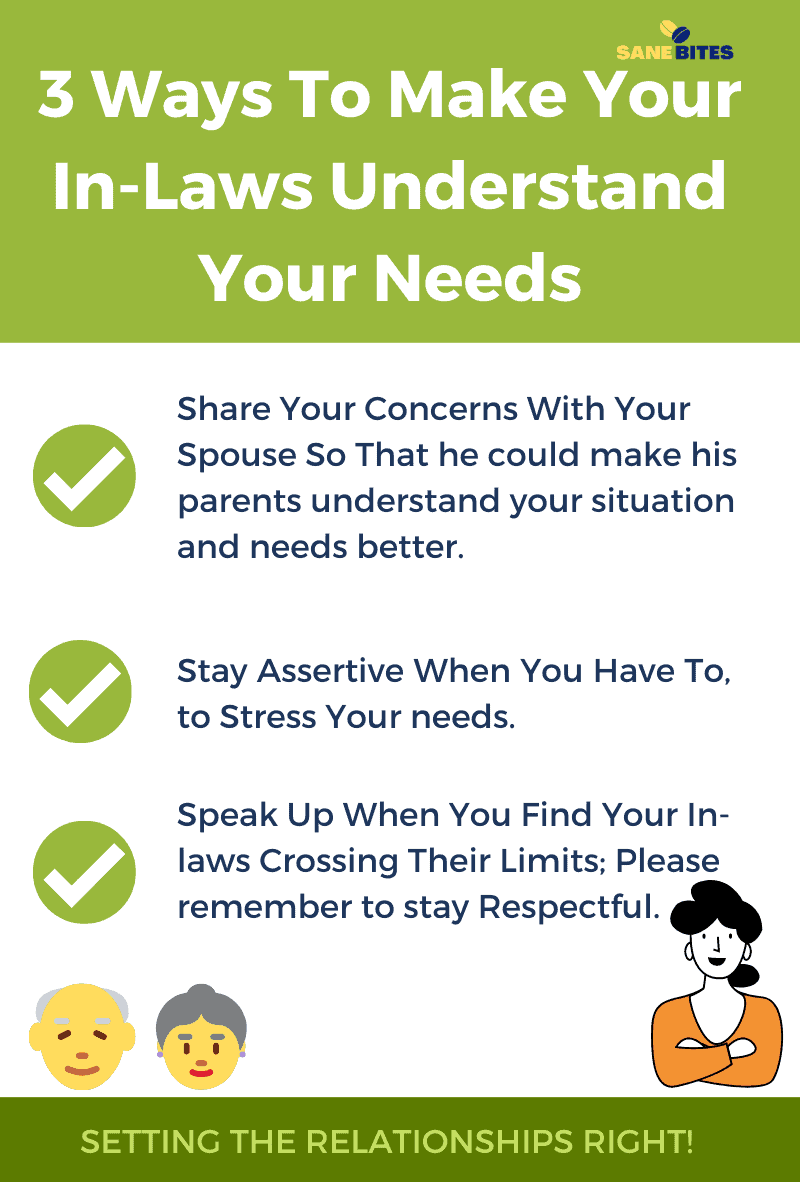 Are Your In Laws Ignoring Your Needs – 13 Evident Signs You Must Be Aware Of!

Here is the list of 13 signs that could tell you if your in-laws are ignorant of your needs or not. Keep reading to know more and take charge of the situation at the earliest!

1. Are Your In-Laws Ignoring Your Needs – They Do If They Do Not Respect Your Private Space And Time

Say you are doing your office work from home or that you are reading your favorite book in your free time.

In such a case, How would you feel if your mother-in-law interrupts you without announcing and starts chattering?

Or how would you feel if she beckons you to do some house-work like cleaning?

Wouldn’t her actions get on your nerves?

Wouldn’t you feel pissed off for the lack of importance that she shows towards your private space and time?

Shouldn’t she be sensible enough to understand things?

If such is your case, does it not mean your in-laws are insensitive to your needs?

2. Your In-Laws Never Understand That You Could Miss Your Family Too!

Every daughter would have insurmountable love and affection towards her parents.

Especially when they are newly married, their home-sickness would be on a higher side and their longingness to visit their parents would be even more. Is that not natural?

Say you have been mulling over visiting your parents for a while now and inform your decision to your in-laws as well.

In such a case, how would you feel if they taunt you back? What if they make it look like visiting your parents is a wrong thing to do?

Is that even fair on their part to behave in such insensitive ways? Does it not mean they are ignoring your needs?

Had it been their daughter in your place, would they even appreciate it if the former’s in-laws treated her the same way?

For every woman, there could be nothing as difficult as leaving her family to move with her spouse and in-laws. But shouldn’t the latter understand this?

Say you are a newly married daughter in law.

What if your in-laws do not pay heed to your emotions?

How would you feel if they are not treating you well enough?

What if they don’t care whether you eat or not?

What if they don’t care even if you remain isolated and withdrawn?

Shouldn’t they be broad enough to understand your needs considering that you are new to their place?

Shouldn’t they give you ample emotional and moral support taking the place of your parents?

I came across an article in TOI that discusses a solution for a daughter in law who feels neglected by her in-laws which you might find useful.

Considering this, how do you think your in-laws treat you?

Tell me, are your in laws ignoring your needs?

4. Do Your In-Laws Fail To Realize Your Importance In Their Son’s Life?

Most parents miss to see the fact that their son is not just their son anymore after marriage; And that the latter are equally obliged to their wives.

That said, Wouldn’t their over-protectiveness and possessiveness towards their son pose a challenge to their DILS?

As a DIL, how would you feel if you find that your in-laws are overpowering enough and are trying to control your partner?

What if their influence and interference in your marriage life turns out to be bad for your relationship with your spouse?

In that case, shouldn’t your in-laws understand your needs as a wife and stay within their limits?

Shouldn’t they realize the basic requirements of a wife?

5. Your In-Laws Fail To Understand Your Private Relationship With Your Spouse

As elders, shouldn’t in-laws be aware of the necessities of a marriage? Shouldn’t they understand the requirements of their son and daughters in law?

Say your mother in law disrupts your alone-time with your spouse after a tiring day at work. Wouldn’t that annoy you?

Or What if she comes forward to accompany you and your spouse when you have planned for a shopping date with him exclusively. Wouldn’t that utterly disappoint you?

Or What if your in-laws hamper your vacation plans with your spouse?

In what ways their insensitive actions are even justifiable?

Be honest. Are your in laws ignoring your needs like this? Have you ever been in such a situation?

6. Do Your In-Laws Overlook Your Need For Financial Independence?

Women these days, for sure have so many aspirations as far as their career is concerned.

That said, say you are someone who was not working prior to your marriage but would like to go for a job, to meet your monetary needs independently.

In such a case, what if your conservative in-laws are against your idea?

What if they play a spoilsport to your dreams and requirements?

Does it not mean they disregard your needs?

Be frank – Would you be able to stand it?

7. Your In-Laws Do Not Allow You To Build Your Zone At Home

What of women who do not feel comfortable in their marital homes because they are being controlled with unfounded rules and restrictions by their in-laws?

Say you are a DIL who faces discomfiture and inhibitions to cook or even eat anything as you desire in the presence of your in-laws considering their conditions and rules. How long could you put up with such barriers?

For example, consider that your mother in law keeps imposing you with her instructions and guidelines while you are cooking something. Would you even appreciate it? Wouldn’t your space be crippled in such a case?

Does it not mean you would feel uncomfortable and uneasy in your own house? Shouldn’t your in-laws realize this fact?

Tell me frankly, are your in laws ignoring your needs like this? 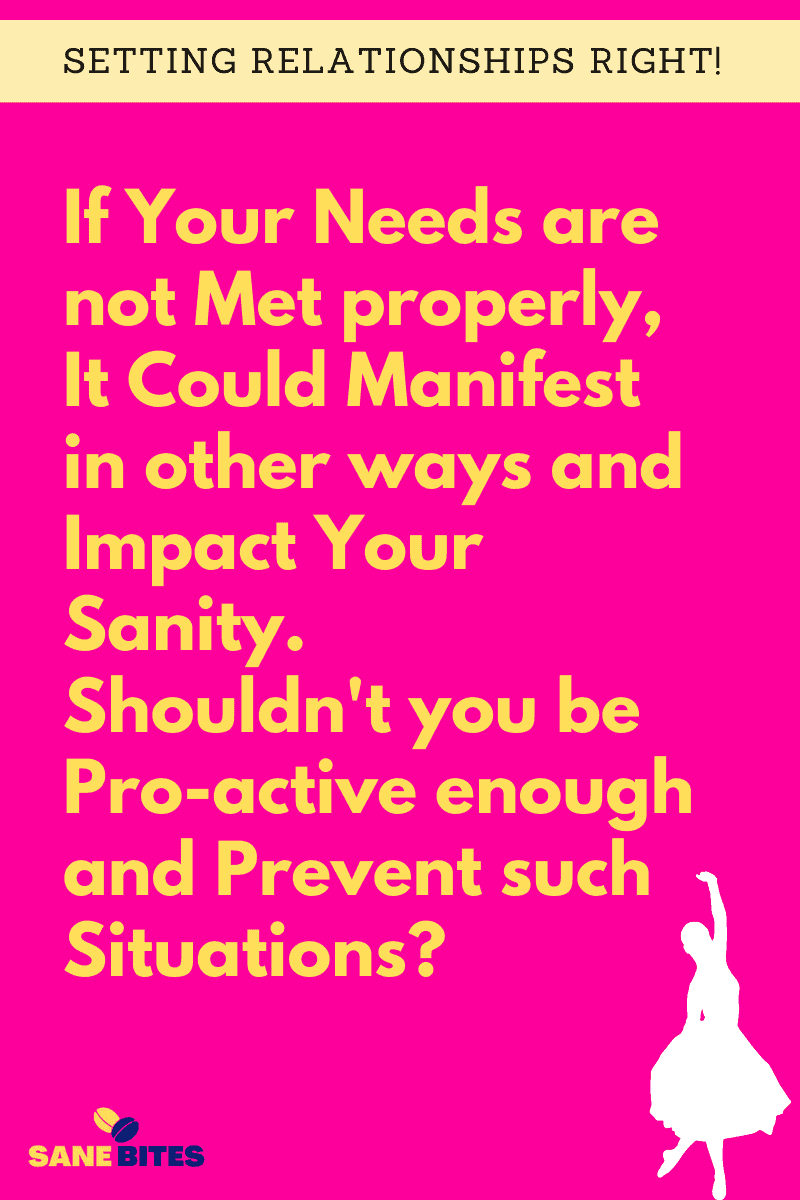 8. Your In-Laws Never Include You In Decision-Making

Say your in-laws plan to perform a puja at your home and don’t take your word before making the decision. Would that not offend you?

Fairly, shouldn’t they be considering you as their family and make you feel inclusive by taking your suggestions?

Shouldn’t they realize your importance in matters and decisions pertaining to your family?

That said, Wouldn’t their ignorant actions lead to your despair?

What is wrong if it is one of the major expectations from a DIL?

9. Your In-Laws Fail To Realize That You Are An Independent Person

Consider that your in-laws stop you from visiting your friends or colleagues. How would you feel?

How would you stand it if your overbearing in-laws control you all the time through their mindless actions and words?

By doing so, wouldn’t they be posing a threat to your freedom and independence?

Shouldn’t they realize their mistake?

Like this, Are your in laws ignoring your needs too? If yes, shouldn’t you be taking charge of the situation?

10. Your In-Laws Are Over-Burdening You With Work

Are you a working daughter in law who feels torn between your job and domestic chores?

Do you feel that your in-laws are dumping you with a lot of work inconsiderate of your heavy work-load?

Does it not mean your in-laws are ignorant of your difficulties?

Shouldn’t they understand your need for a breathing space?

Do you not see this as one of the overlooked problems of DILS?

11. Your In-Laws Never Ask Your Suggestions And Views

Be it buying a gift for a relatives’ marriage or buying furniture for home, do you have a feeling that your in-laws are not taking your suggestions?

Do you feel bad when they neglect you during such instances?

Whether intentional or unintentional, shouldn’t they realize your importance in their family?

Open up to me, are your in laws ignoring your needs like this?

12. Do Your In-Laws Stop You From Shopping And Spending?

Most of the Women are shopaholics by nature and there is no wrong when they satisfy their thirst once in a while.

That said, have you ever felt being stopped or restricted by your in-laws from shopping?

Or do they often pass remarks that you are spending money lavishly in clothes despite you being economical in your shopping ventures?

Does it hurt you when they become a barrier to your small-small desires?

If yes, does it not mean your in-laws are ignorant of your small needs like this one?

13. Do You Feel That Your In-Laws Do Not Treat You With Enough Respect?

Every woman deserves her share of respect and the same is applicable to a daughter in law as well.

Say your in-laws are dominating enough and try to control you through their mindless commands, words, and actions.

Would that not set a question mark to your self-respect and dignity?

Shouldn’t your in-laws realize the fact that DILS are not their puppets?

Shouldn’t they understand your need for respect?

The major problem with most parents-in-laws is that they never try to see their daughters in law as equals in this society. And that’s what stops them from understanding the latter’s needs as well. Shouldn’t this situation change for the better? Share your thoughts in the comments section below!