Are You Someone Who Wants To Give Up On Your Approval-Seeking Behaviour?

How should daughters in law stop seeking approval in their day to day lives?

As a daughter in law myself, I often find myself fighting a battle against my inhibitions and the urge to seek external validation. In this blog, I have compiled a list of self-reflection methods I use to win over my obstinate mind and its ploys.

Stay with me, I will tell you what they are! 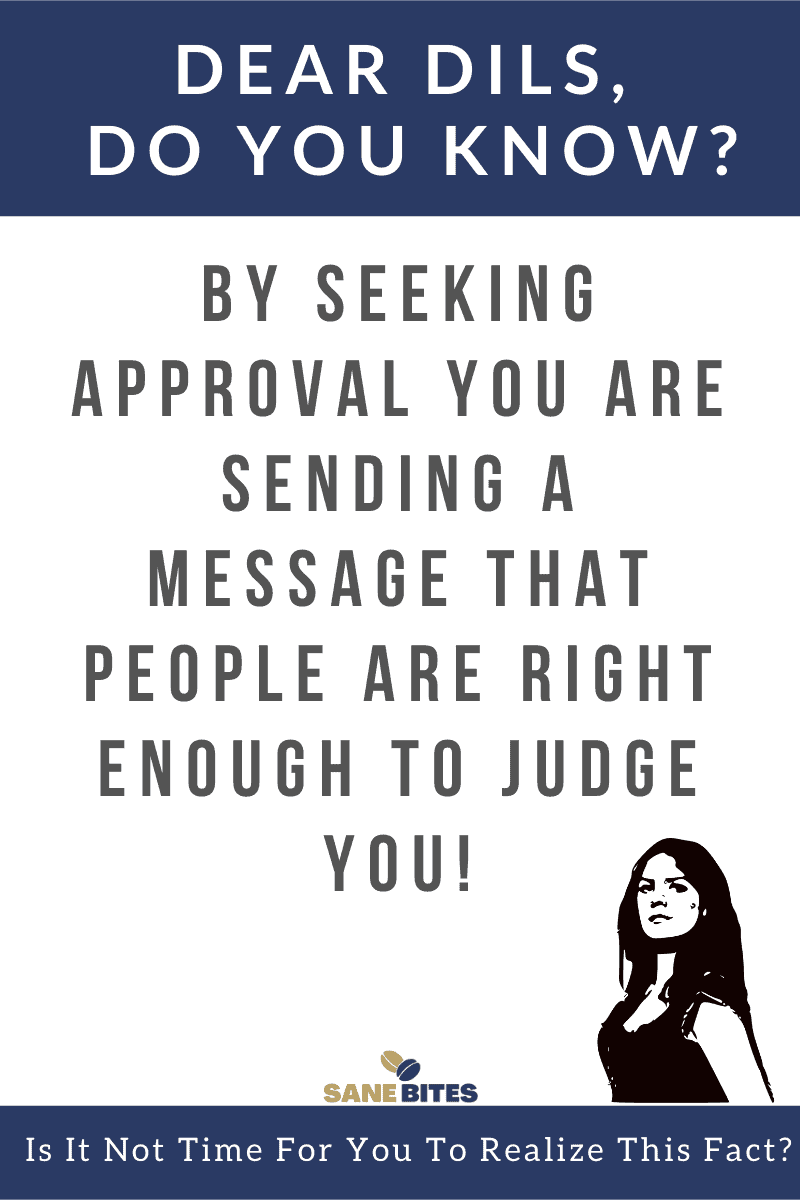 How Should Daughters In Law Stop Seeking Approval – 13 Tried & Tested Ways You Must Read!

The following is the list of 13 ways that will clear your approval-seeking problem effectively. It’s the matter of mind and you should go about it deliberately and wisely! Here you go –

Read on as I have explained them in detail below!

1. DILS Should Understand That They Are Just BEGINNERS

Most of the daughters in law are unsure about their cooking skills and expect people around to validate their work.

I don’t understand, are they subjected to any rigorous examination?

Daughters in law should also see through the aspect that their mothers in law were no experts too in cooking when they got married.

Anyone for that matter gains their expertise in a domain only as they grow. But how is that possible in a go?

The fact that experience happens with time should be instilled deep in the minds of the daughters in law.

Whether it is the art of cooking or financial management of the house, mastering them requires time and it is okay if daughters in law are not good at them. The important aspect being their ability to make peace with this fact!

2. DILS Should Give Importance To Their ORIGINALITY And NATURE

It is highly possible for the newly married daughters in law to go out of their way to do things that would satisfy and meet their in-laws’ expectations.

The reason being the former’s approval-seeking behavior trying to earn a good name as DILS. Don’t you think this attitude has to be tamed at any cost?

Tell me something, are daughters in law born to please and satisfy members of their marital homes? In what way is that even self-justifiable?

Cooking and taking care of home is just a responsibility.

By seeking validation in these things, DILS only complicate things for themselves.

That said, how should daughters in law stop seeking approval?

All that they should understand is the essence of their duties and stop burdening themselves.

Life skills are not supposed to be confused for a test; They are mere responsibilities and cannot be sent for evaluation. Would daughters in law come to terms with this fact?

4. DILS Should ACCEPT Themselves The Way They Are

Most of the problems could be solved when daughters in law accept themselves the way they are.

What is the need for them to tweak their schemes and make efforts to please others?

Shouldn’t they be wise enough to respect themselves and have their heads held high all the time?

Why should they forget themselves in this approval-seeking game and lose themselves out?

That said, how should daughters in law stop seeking approval? Do you not think practicing self-acceptance could make things easier for them?

5. DILS Should Learn To Place Enough CONFIDENCE In Themselves

Daughters in law should not be hard on themselves for the way they are and feel demotivated under any circumstances.

Instead, equipping themselves with enough confidence and placing faith in themselves would enhance their personality and self-confidence.

That way, their approval-seeking behavior could be brought to an end, don’t you agree?

6. How Should Daughters In Law Stop Seeking Approval – They Should Learn To FORGIVE Themselves

At any point in time, daughters in law should not allow themselves to be carried away by others’ disappointing remarks and subject themselves to internal-battle.

Anybody could make mistakes for no one is perfect.

That said, DILS should come to terms with their mistakes and take it as their learning.

By forgiving themselves, they will not only retain their mental peace but also stop seeking approval from others!

7. DILS Should SHED Their Inhibitions

“What will my Mother in law think?”

What would my spouse think of the arrangements I have made? Would he like it?”

Such fear and inhibitions are a result of social conditioning and daughters in law should stop giving importance to such negative thoughts.

Expecting people to acknowledge their work would only take a hit on their mental health and hence, they should put an end to such mental barriers. Don’t you agree?

8. DILS Should Learn To IGNORE Criticisms

No matter how hard daughters in law work for their families, criticisms would never stop coming their way.

Such negative fumes should at any cost not be allowed to aggravate the daughters in laws’ approval seeking behaviour even more.

The fact is such situations are inevitable and they should not be taken as a ground by the DILs to better their performance.

If people are not ready to accept them and their way of doing things, let the onus of their negative thoughts lie with them.

Daughters in law should just ensure to neglect them. Why even care about what others think?

I feel this is one of the best ways through which DILs could let go of their approval seeking behaviour.

9. DILs Should Never COMPARE Themselves With Others

Like how all fingers are not of the same length, how could daughters in law compare themselves with others?

Say your sister in law cooks better than you and people appreciate her for her work.

Though this might get you disappointed, do you not see this is not something that you should really worry about?

The problem is when such anxious thoughts are given excessive importance, one’s approval-seeking behavior will only see an increase. So, it would be better for the DILS if they stay away from such mindless comparisons!

10. DILS Should STAND UP For Themselves When Their Hard-Work Is Questioned

Consider those Daughters in law whose Mama’s Boy Husbands Compare Them With Their Mothers often. Things will never be less complicated for them.

Such comparisons could get the DILS offended and would also implicitly encourage their approval-seeking behavior.

Under such circumstances, it is important for the DILS to take a stand for themselves, confront their partners assertively, and make their stance clear. Don’t you agree?

11. How Should Daughters In Law Stop Seeking Approval – They Should Be APPRECIATIVE Of Their Work

Shouldn’t daughters in law feel content for the genuine efforts they make for their families?

Shouldn’t they give themselves a pat on their shoulders for their hard work?

When DILS start reminding themselves the way they sweat themselves out for their families, it will keep them afar from their approval-seeking behavior.

12. DILS Should STOP Being Critical Of Themselves

Self-evaluation is something all people do every now and then to keep a tab on their work. But the same cannot be allowed to become a threat to their well-being, isn’t it?

That said, daughters in law should stop being over-critical of themselves and learn to see their positives too. I came across this article in Inc that discusses solutions to self-criticism.

When DILS give importance to their positives, their perception towards external validation will automatically change and see a decline!

13. DILS Should Realize Their VALUE

Self-worth is something most daughters in law fail to realize in their lives.

Only when they start valuing their work and presence, they will start understanding the negatives of their approval-seeking attitude.

That said, how should daughters in law stop seeking approval? Do you not think crediting themselves enough for their work will get them out of this habit easily?

Approval Seeking Behavior is something that arises out of insecurity and social conditioning. Such a characteristic will not just reduce one’s self-respect, it will also make them a subject of control. High time, daughters in law realize this and quit such an attitude. What do you think? Share your thoughts in the comments section below!