Spend Your Valuable Time With Your Partner With These Films That Could Make Your Marriage Problem-free!

If you are looking to get a better outlook on marriage, I am sure movies about marriage problems will serve you the best.

In case books are not your choice of learning things, this is the right place for you. Check out these movie suggestions and get your relationship steered to greater heights! 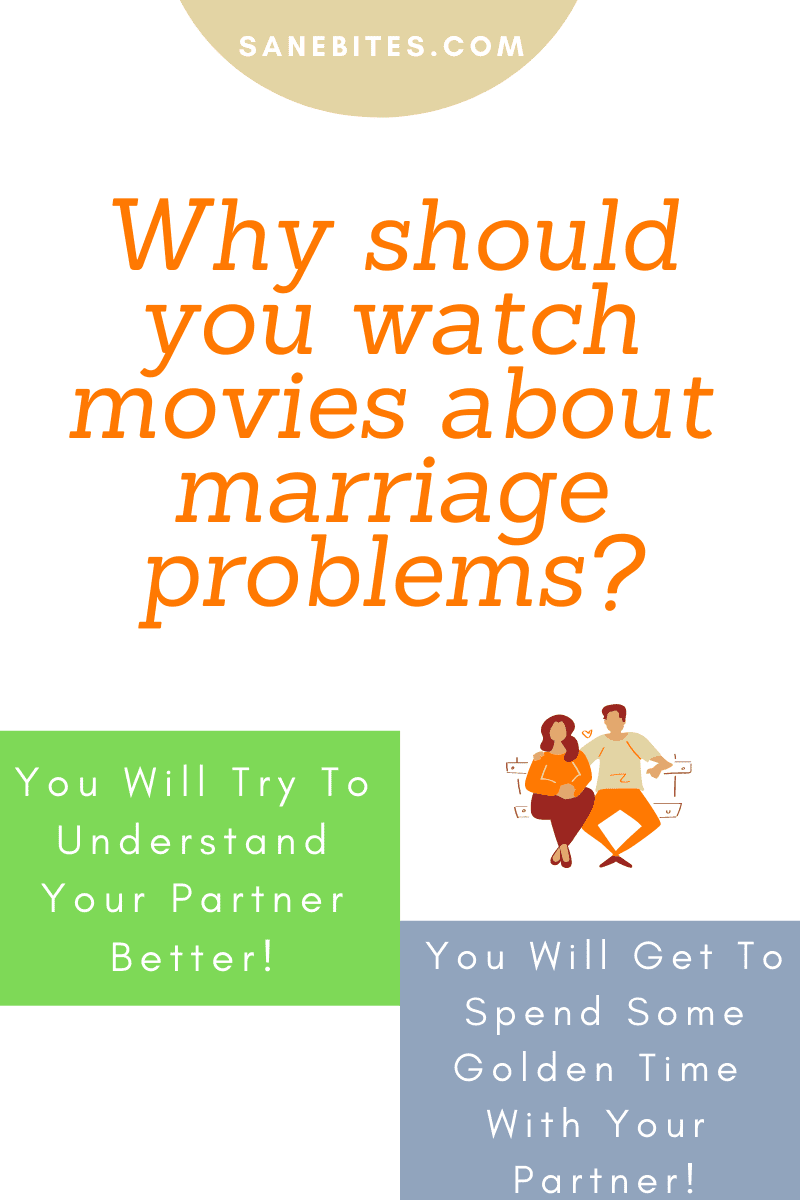 11 Striking Movies About Marriage Problems No Couple Should Miss Out On!

With the fast-paced world around, I understand it is hard to stop by for anything out of your scheduled life; but yes, if you are willing to get some profound thoughts on marriages & its problems, there are a lot of movies out there that could change your perspective and stance in your relationship.

In case you are battling a hard marriage or finding it difficult to manage your better-half, you could gain some fruitful advice from a good number of films.

After a complete study, I have come up with these 11 movie suggestions – These don’t address a specific problem, rather they depict a number of issues that most marriages face across.

You are sure to benefit from these – Grab some time during your weekend and land yourself a place on your couch to watch these truly marriage pictures that will transform you into a matured partner forever!

1. Hope Springs Directed By David Frankel, Is A Movie With A Typical Marriage Hiccup!

Is your decade-old or more marriage weakening the bond you share with your partner?

Do you feel unheeded and unloved in your relationship after years of being together? The spark that once used to make things magical between you both, is that missing now?

The picture shows the partners approaching a marriage-therapist who works hard with them, setting their marriage on the right track once again. I am sure you will love the picture!

If you’d like to revive your relationship with your partner sincerely, here are 71 Affirmations you could practice daily to get you on track!

2. The Mirror Has Two Faces Directed By Barbra Streisand Is One Of The Best Movies About Marriage Problems!

Rose Morgan, an English literature professor in the Columbia University, feels she is leading an inadequate life with no man to love her because of her rotund-physique.

On the other hand, Gregory Larkin, a maths professor in the same university has turned allergic to physical intimacy in relationships owing to his bitter past and looks out for a genuine partner’s hand in marriage, on the condition of nil physical relationship.

What issues do these two undergo once they are married?

How do their fears play out to be a stumbling block in their marriage – Check out the movie for some interesting insights starring Barbra Streisand and Jeff Bridges in lead roles!

3. Marriage Story Directed By Noah Baumbach, Is A Must-Watch For Couples Driven By Ambitions!

Starring Scarlett Johansson and Adam Driver, this movie depicts an unusual divorce of the sorts where the partners’ respective careers play a major decider.

While the duo are empathetic, sharing enough love with their son, they fail to sort out their hearts’ voices, basically that generates a communication-gap between them & an ambitious-mindset that drives them away from one another.

I guess this is a must-watch movie for every modern-couple out there who are making it big in the external world while failing simultaneously in their personal lives. Just go for it without much thought!

Check out these 35 books you could read with your partner to improve your marriage!

4. Blue Valentine Directed By Derek Cianfrance, Shows Why Marriage Is A Responsibility – To All Millennial Couples Out There!

What starts off as a spark between Cindy (Ryan Gosling) and Dean (Michelle Williams) , ends up in utter distaste six years later. But a relationship or marriage is no play. It’s a stamp of trust, faith, care, love, and whatnot!

When Dean could promise Cindy a good marriage and life to their unborn daughter initially when physical touches and sensual pleasures were high on his spirits, his inability to grow responsible in his relationship over the years, puts their marriage at stake.

Being a drunk and an unlikely partner to shoulder familial duties, Dean poses a great challenge to Cindy and their little one.

I am sure, this is one of the movies about marriage problems that every couple could resonate with thereby understanding the very root of their relationship!

Would you love to gain a new perspective on marriage – Here is what you should read!

5. Unfaithful, Directed And Produced By Adrian Lyne – A Movie That Could Give You A Better Marriage Perspective!

It is not just fights and differences that could cause a crack in a marriage – Even monotony and a less exciting relationship could.

Edward and Connie Summer (roles essayed by Richard Gere & Diane Lane) are married with their nine-year old son, but then what seduces Connie to have an affair with Paul Martel?

Read how events take an unpleasant turn when Edward finds out about his wife’s fling – A normal film sending out a very strong message!

6. When A Man Loves A Woman, Directed By Luis Mandoki Is Another Great Film That Talks About Alcohol-Addiction And Its Impact On A Marriage!

What happens when alcohol could wreak havoc to a relationship?

The National Epidemiologic Survey on Alcohol and Related Conditions Study led by James A Cranford shows that marriages with alcohol influence could most possibly end in divorce.

In When a Man Loves a Woman, Alice Green, played by Meg Ryan is addicted to alcohol, and creates a mess around the lives of her two young daughters.

When Micheal Green (Andy Garcia), her responsible husband realizes this, he persuades Alice into a detoxification program that would get her out of her haunting trouble.

Later, when Alice grows fit and fine, how would their relationship take its course?

How would Micheal accept & trust the recovered Alice completely and let go of his control over the family?

A movie that speaks a thousand wise thoughts, something that no couple should miss!

Also Read :: Is it Ok being Controlling in a relationship?

7. Marley And Me Directed By David Frankel, Could Be A Simple And Light Watch For Married Couples!

Are you looking for movies about marriage problems? How about a story revolving around a couple and their pet dog?

Though the movie majorly focuses on Marley, the messy yellow labrador pet of John and Jenny Grogan played by Owen Wilson and Jennifer Aniston  , it also provides major insights on the couples’ career, their financial status, pregnancy, and even the post-partum depression.

If you’d like to understand such common problems in marriage, you must watch this film with your partner for sure!

8. Shall We Dance? Directed By Peter Chelsom, Is A Feel-Good Watch For Movie Loving Couples!

I guess this is a simple movie that every dance-loving couple should watch.

John Clark, essayed by Richard Gere , decides to join dance, attracted by Paulina (played by Jennifer Lopez), a gloomy yet a gorgeous lady he spots by the dance class window on his way everyday to his office.

Clark’s unusual absence from home for long hours, makes his wife Beverly (played by Susan Sarandon) doubt his fidelity that she hires a private investigator to track his secret activities – Something I find as a major issue in marriages these days.

Why not have a direct face-off with your partner instead of trying all kinds of around-the-nose ways?

Anyway, John falls deeply in love with dance with time and not Paulina, taking the film to a beautiful ending showing the Clark-couple dancing together – Isn’t that interesting?

Do You Know These 29 Red Flags in a marriage – Check it out Here!

9. Indecent Proposal Directed By Adrian Lyne , Is A Movie That Discusses The Role Of Money In Marriages!

Are you looking for movies about marriage problems – Don’t worry, here is one for you!

When David and Diana Murphy (Woody Harrelson & Demi Moore ) are plagued by financial constraints , they are posed with a horde of challenges that goes to the length of breaking their relationship.

A family drama that everyone could resonate with in many places sends a clear message across that “Love is strong enough to fail in the hands of money” – I am sure, you will have a good time watching it with your partner!

Also, I came across this insightful article in allbusiness.com that talks about the impact of financial problems in one’s marriage – Feel free to check it out!

10. The Story Of Us Directed By Rob Reiner Depicts A Marriage That Could Be Thought-Provoking!

Many of us dismiss the hardness that marriage showers, owing to our undue unwillingness and impatience to handle rough times with our partners.

You see, divorce anyway is a way out for many across, isn’t it?

In The Story Of Us, Ben Jordan and Katie’s marriage  (roles essayed by Bruce Willis & Michelle Pfeiffer) also takes an ugly turn that they hard-act a cheerful-relationship in front of their children.

Nothing wrong, but shouldn’t one among them make an effort to open up and resolve the issue?

I feel this is one movie that everyone shouldn’t miss watching to know that marriage isn’t all cheesy and rosy like pre-marriage days!

11. Take This Waltz Directed By Sarah Polley Is One Of The Movies About Marriage Problems You Shouldn’t Miss Watching!

Whether we join a new job or shift to a new house, don’t things get normalized and monotonous once we are familiarized with it?

Similar is the situation with marriage too, that most people fail to understand. Take This Waltz is a movie that depicts exactly the scenario in an understandable way.

How Margot and Lou Rubin (played by Michelle Williams & Seth Rogen), a married couple lose their relationship with time though without much hiccups. How Margot gets attracted to Daniel and goes after him; this forms the entire plot.

Every relationship has its own setbacks, but how we choose to handle and maintain them without strain is in our very hands.

The movie was directed by Sarah Polley, and it is an insightful watch that no couple should miss!

So this is it for now! You could comment below your personal choice of movies and tell me why it could be a good watch for married couples – I will be glad to add them to my list 🙂

Good day to you 🙂