Are you a Daughter in Law Seeking Solutions to tackle those Insensitive Relatives?

Tackling Insensitive Relatives after marriage is a major issue that daughters in law face today.

The kind of Chaos that these people bring about, make it more challenging and frustrating for the daughters in law to handle.  What are they?

And how are the daughters in law supposed to grapple with them? Read on to know more! 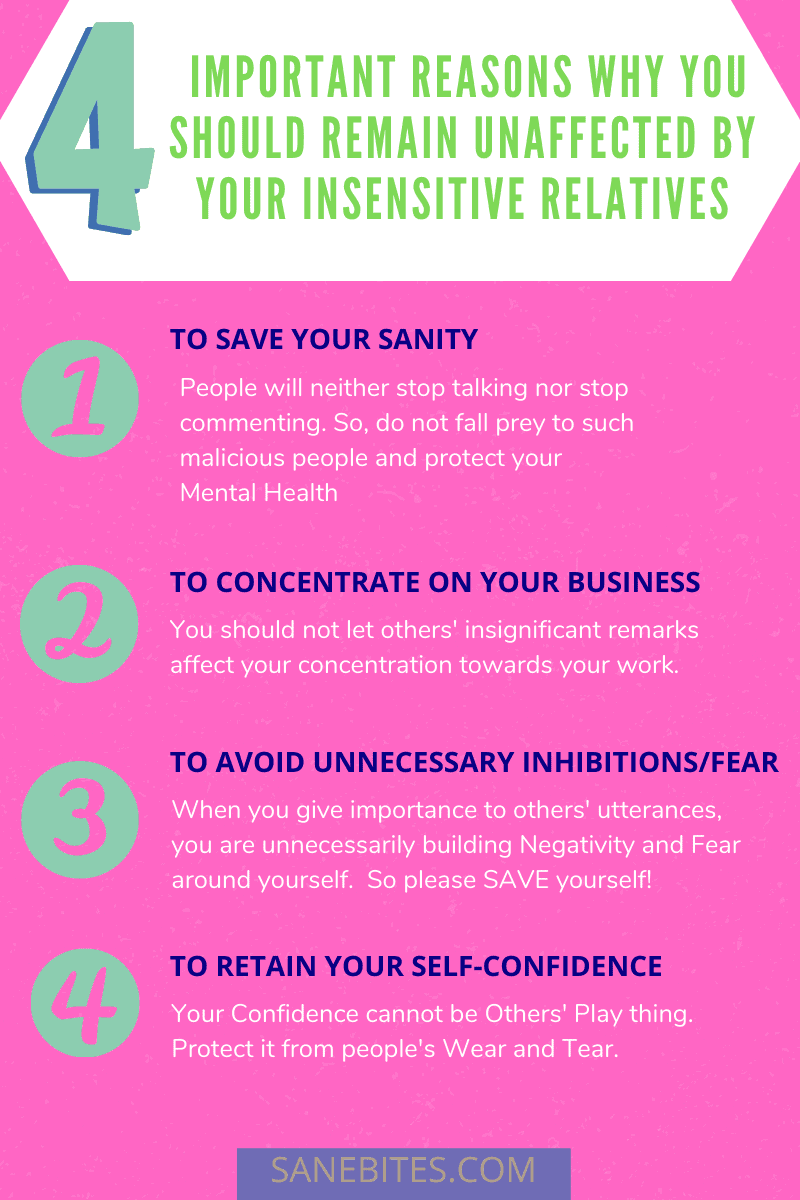 The Following are 6 Effective Tips that have helped me in dealing with some of those insensitive relatives I came across post my wedding.

Read on as I have elaborated them with some of my own experiences. Hoping that you would find this Useful.

Daughters in Law should Practice Ignorance in their Everyday Lives

Scenario 1 :: When the Relatives Scrutinise the Brand-new-bride’s Face

It is undoubtedly an ordeal task for women in tackling insensitive relatives after marriage especially when the problem jumps in right after the wedding.

In the wake of the morning after the wedding day, one could spot these curious bunch of aunties, who would be busy prying on the bride’s face for a gleam.

*I hope I make some sense*

My aunt who visited me the very next day of my wedding asked me to show my face and she started inspecting it as though she were a physician.

I was like, “What are you looking at, aunty?”

And she replied, ” No. I was just wondering if your face gives that new-glow”.

“Seriously! New-glow? What is that? Is that something too significant to take note of?”, my mind went haywire.

“You will not understand”, came her response.

I started feeling embarrassed as she kept eyeing me without a blink.

Didn’t she have any work at all to do?

Whether my face was glowing or not, what was her business? And what was it that she was too concerned about?

I couldn’t stand her anymore and I swiftly ignored her to get on with my business.

And I feel it was the nicest possible way for me to shrug off an insensitive person like her.

Why give such people even a speck of importance?

Scenario 2 :: When the Relatives take a Dig at the Husbandman

Relatives are inquisitive by nature and they would go head-over-heels to catch a glimpse of the groom at any wedding they attend.

Their conquest would not just end there as they go on about registering the groom’s color, features, and even physical structure.

I am sure that even the bride herself wouldn’t have scanned her would-be-husband this much.

During one of my cousins’ wedding, one of my aunts started exaggerating, “Look at the groom. Isn’t he tall, sleek, and handsome? It’s harder to find such men these days, Akila. You know what? Shankar should reduce his body weight”.

Of course, I detested when she took that dig at my husband unnecessarily who was short and a little stout by nature. So what?

When I didn’t have a problem, who was she to fuss it over?

I unequivocally disregarded her remarks and started binging on my phone. What better way could I choose to ignore such an insensitive lady?

Daughters in Law should Distance themselves from Insensitive Relatives

When In-Laws are Influenced by those Insensitive Relatives

Like how Career and Education is being made competitive by people, Relationships too are becoming excessively competitive these days.

“My daughter in law cooks so well”, one of the mother in law ‘s quips.

“My daughter in law does South Indian Cooking so well”, the other replies.

In such situations when the daughters in law are around, Wouldn’t they feel embarrassed?

In this case, don’t you think it would act perilous to the given daughter in law’s Well-being and Peace?

Isn’t that exasperating? How is it even possible for people to get influenced by their surroundings?

What is the plight of these daughters in law when they are subjected to such situations?

The problem here lies with the parents’ in law who get influenced by such insensitive relatives and their insignificant analogies that pose a risk to these daughters in law. And I Strongly feel that the change should happen from them!

As of the daughters in law, they should as much distance themselves from such insensitive people to safeguard their Sanity!

Daughters in Law should Master the Art of Response

Once in a while, these so-called insensitive relatives visit home to check on how these new daughters in law are faring post their wedding.

They would even check on how these women as daughters in law treat and serve the visiting relatives and elders.

Say a new daughter in law cooks for such people.

One from the given insensitive bunch would for sure comment, “Oh, this woman literally knows nothing” or  “The food was okay”

In such a case, smilingly the daughter in law should reply, “I cannot meet your Standards, of course! I have done whatever that I know”

Daughters in Law should learn to give proper responses where-ever required as it would make them more Assertive. Trust me, when they create such an image for themselves, people would for sure restrain themselves from commenting or talking about them.

Daughters in Law should not Entertain Insignificant Conversations

Scenario 1 :: When Insensitive Relatives Try to Bring Chaos to the Family

In cases where some relatives have hidden motives, as in they hold grudges against the family, there are high possibilities that they would target the new daughter in law.

Daughters in Law should Gauge the Situation and Respond Accordingly

One such incident happened in my family, where one of my aunts tried to influence my sister-in-law (my brother’s wife).

“Don’t believe your sister in law. She is selfish”.

However, my quick-witted sister in law had grasped her intentions and simply diverted the topic.

Don’t you see it as the best solution to escape such insensitive people?

Scenario 2 :: When Insensitive Relatives are too Keen about the daughters’ in law’s whereabouts

Tackling Insensitive Relatives after Marriage is definitely a tiresome process.

Mostly after the wedding, most of these married women’s relatives would be too curious to know where they are put up.

Every time I get a call from my uncle or aunt, they would ask, “Where are you, Akila? Are you at your parents’ place?”

Of course, I used to live closer to my parent’s place but does that mean I should be there all the time?

Okay, even if I am at my parent’s house, what’s their problem?

What’s with their concern all of a sudden?

All those days, prior to my wedding, those people who didn’t even bother to ask about my well-being are suddenly now, very much worried about my whereabouts!

Too affectionate, aren’t they?

An answer so encoded, confusing, and terse. I believe only such responses would keep them out of my way. Dragging Conversations with such people would only make women susceptible to their insensitivity.

And my case was no different.

Just imagine meeting these “INSENSITIVE RELATIVES” a few months after the wedding. Wouldn’t that be one hell of an experience?

They will ask me, “Akila, no special news? It’s been a year since you got married.”

As if they are too concerned about my life!

I would softly reply, “Everything will happen when it should happen”. And I would instantly exit the spot.

Giving in to conversations with such people would only trigger one’s animosity. So it’s better not to entertain such people.

Scenario 4 :: When Insensitive Relatives Calibrate the New Son In Law of the Family

Right from the time these insensitive relatives hear the wedding bells of their fellow family members who are women, they would grow all excited to find out the particulars of the groom’s families.

In order to form a subject for their discussion, these people will go to any lengths possible to draw out as much information as possible.

To give you an example, One of my aunts, intending to extract information about my would-be-husband asked me, “I heard that your in-laws are millionaires. Is that true?”

Huh? Seriously! I never knew that!

Any way, What’s her stake even if my in-laws were millionaires? Only God knows!

I quickly evaded her question and went on with my business.

It’s better to avoid such insensitive conversations; For their hunger-pangs over others’ lives are never-ending.

When the husbands obey their wife’s words or directions or when the husbands stay around with their wives, they would be described as “henpecked” by these insensitive relatives.

The other day, during a small pooja (function) at my house, my brother was roaming about with his wife. And these relatives in the vicinity seemed intolerant of the sight.

One of my aunts looking at my sister in law remarked, “Not bad. You have probably given some magical potion to your husband that he is just sticking around you all the time”.

His response indeed sealed my aunt’s poisonous mouth. And I was relieved seeing the happiness dawning upon my sister in law ‘s face.

When insensitive relatives like this, lace their words with pricks, the response to them should be 10X times stronger enough, to shut them on the shot which could be made easier only with spouse’s intervention! 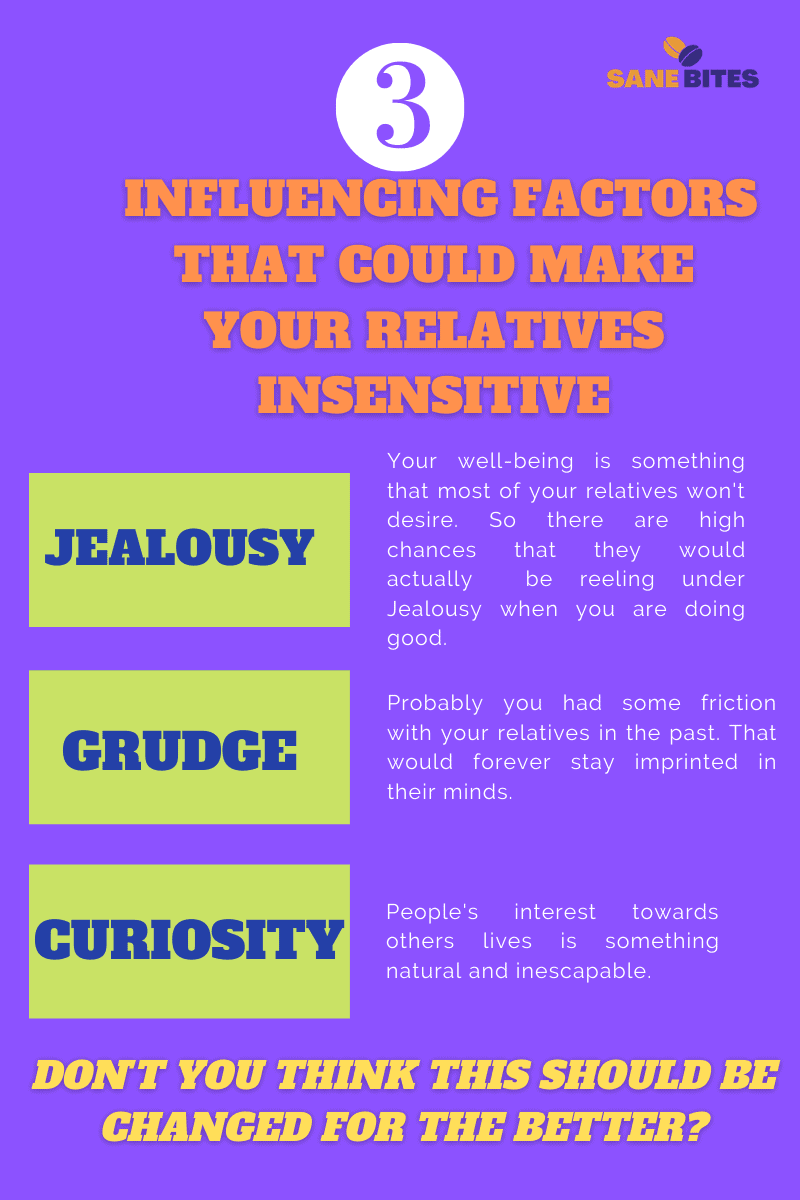 Tackling Insensitive Relatives after marriage is difficult for the kind of subjects they bring up to pull others down.

One of my relatives said, “Akila, your husband is fair comparing you!”

I seriously could not understand what she was trying to convey. As though people get married based on color.

My Dear insensitive relatives, most of the world’s population would never get married if they are using skin color as a major criterion for marriage.

When importance is not given to such displeasing remarks, women could overcome a lot of unwanted mental agony.

Insensitive or rather mindless relatives are a common appearance in our everyday lives who would come up with issues unimaginable and intolerable. No matter how hard we try, we cannot escape them.

Facing them and dealing with them is the only way out of the situation. Just that it requires a little prudence, ignorance, and proper response.