There are a lot of Unfair things that Society expects of women post marriage.

Having experienced those societal pressures as a Woman and Daughter-in-Law myself, I have a couple of insights to share with you in this Blog. 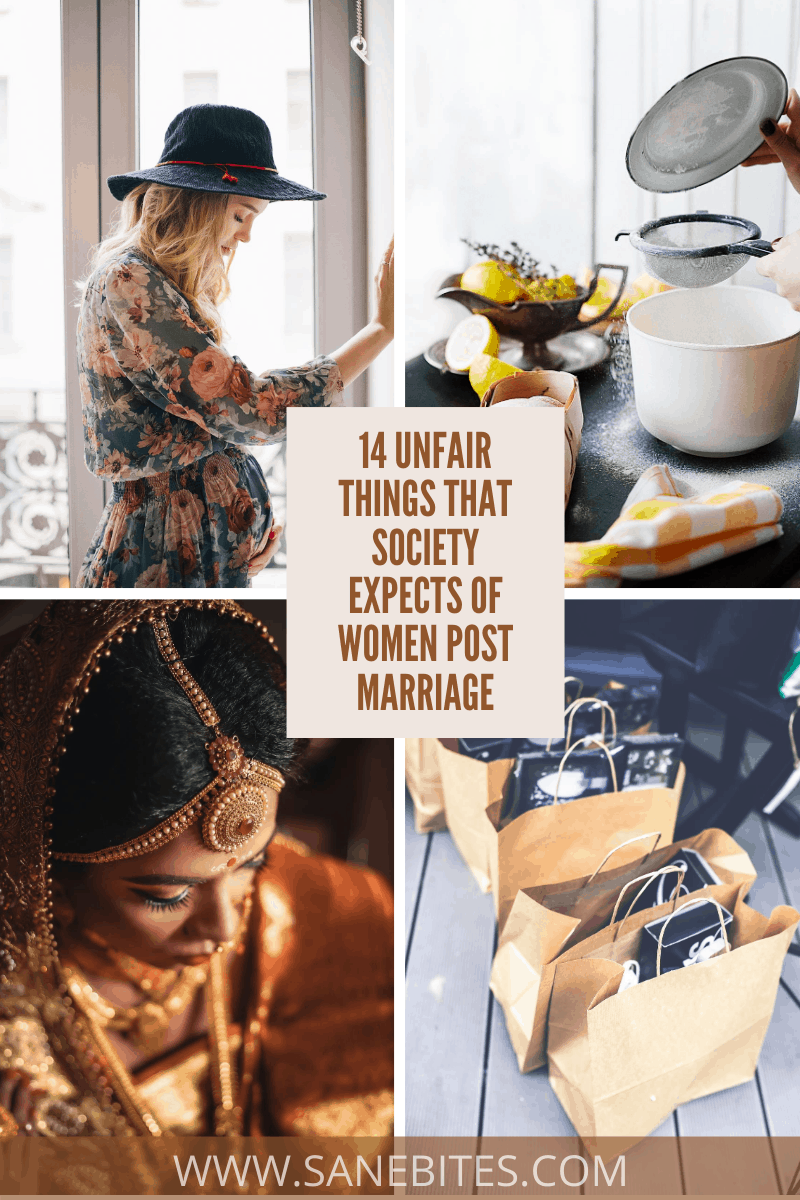 Women’s Rights and Independence take a hit at every level with numerous barriers that society sets for them. Let’s see what they are!

1. Married Women are Considered as Baby-Generators

First and foremost that the society expects from women, is for them to give that “special news” after the wedding.

Women are Pressured into Conception

I have faced this too. Because every time a friend OR neighbor comes home, they would ask my mother-in-law, “Isn’t there any occasion?”

Don’t women have feelings of their own?

Don’t they have preferences and priorities of their own to take care of?

Are they getting married just to conceive?

I believe it’s their life and they are supposed to deal with it.

In that case, who is society to expect them to become expectant after the wedding? Are women literally baby-generating machines?

Don’t you think this mindset should change?

By default, society thinks that the new daughters-in-law has to take care of every home chore.

Dear society, do you teach your daughters to cook?

Just consider these cases I have been seeing since ages.

“My daughter doesn’t have time. She is too pressurized in college to even think of cooking”

“My daughter has too much workload. She doesn’t have enough time”

Ask those same people of their expectations from their daughters-in-law.  They would be like,

“She must know cooking”

“In case she is working, she should be able to cook for us before she leaves for work”

How biased, aren’t they?!

The other day, one of my neighbors casually asked me, “Are you done with cooking?”

Why is cooking just confined to daughters-in-law – Is it not a life-skill?

3. Daughters-in-Law should not Stand up for themselves

Society has its own set of protocols framed for women especially when they are married.

Women should not Raise their Voice Even When They Are Right

In case, a woman speaks up to prove her stand and explain the unjust treatment meted out to her, she would be shamed for the very sake of standing up for herself.

Let’s say a woman fights with her apartment secretary for not fixing the parapet wall in the terrace for her child’s safety.

And people in the apartment be like, “Look at Padma’s daughter-in-law. How arrogant and disrespectful, she is“

Does that mean Women should take a vow of silence post their wedding? What’s wrong if they give their voice for a cause or speak up for themselves?

Once women get married, society expects them to wear clothes that they think is appropriate and respectful for the world.

Women are Judged & Criticised based on their Outfits!

So when a married woman is spotted wearing capri pants OR trousers, society will be like, “Look at her! She is married and wearing all these clothes. How shameful”

Ok so when women wear sarees , aren’t they judged?

When they wear salwar kameez , aren’t they judged?

When will society stop complaining women?

5. Married Women should not Visit their Parents Unnecessarily

In India, married men could stay with their parents while married women should “get due permission and approval” from their in-laws and spouse to visit their parents – How fair is that?

My mother sulks every time my sister-in-law announces that she is visiting her parents,  “A married woman should not visit her parents often. What would society think?”

On the contrary, the same lady now asks her married daughter (ME) to visit her every now and then. You see, being a mother, she duly misses her daughter. Now, where did her SOCIETAL PRINCIPLE dissipate?

All this only leads to building frustration in the family.

Shouldn’t these double-standard practices come to an end?

6. Women should Stay Away from their Parents after their Marriage

I thought marriage forges new relationships. Not until I came across this narration from one of my friends.

Daughters should Forget their Parents after their Marriage

Being the eldest daughter of her parents, my friend emphasized how she has the responsibility of taking care of her parents and getting her younger sister married. In fact, she wants to move her parents with her after her mother’s retirement.

Aren’t her thoughts appreciable and show how duty-bound she is as a daughter?

But take a look at her mother-in-law’s perspective.

“How a woman’s parent could stay with their son-in-law and family? How would that even work?”

This was her response when there was a discussion related to this.

Does that mean parents of daughters should be allowed to fend for themselves in their old age? Is that how daughters should show tribute to their parents who have raised them to good humans?

Does that mean women should severe their ties with their families post their wedding? In what way is that even acceptable? 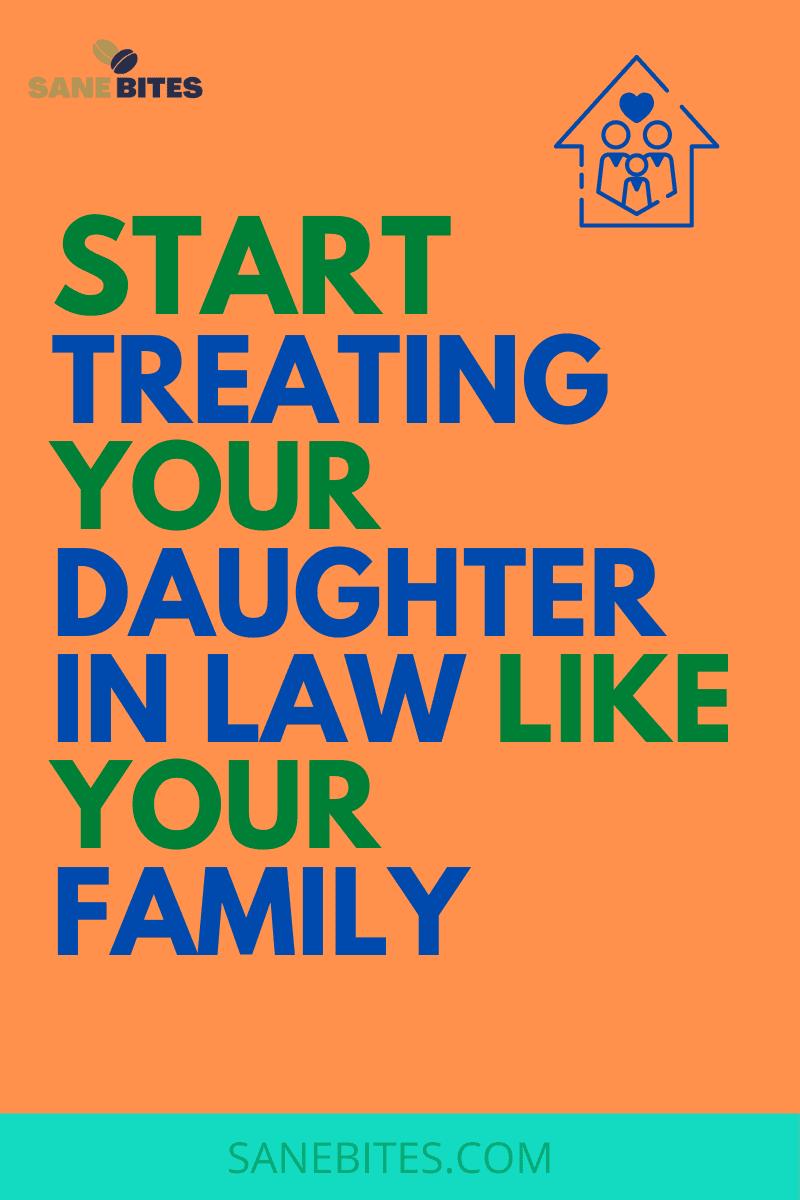 7. Women should Forget Shopping, Cinemas, and Vacations After Marriage

No doubt marriage comes with responsibilities.

But does that mean women should forget their “ME-TIME”?

Spend-Thrift Daughters-in-Law are TAGGED as being Irresponsible

I was once a person who loved shopping clothes.

Back then, My mother-in-law remarked to my husband, “I know how you are wasting your money. Investing in clothes would fetch you literally nothing”

The same happened with my sister-in-law too.

Why? Didn’t my mother OR mother in law go through a similar phase in their lives?

Can’t MILS instead advise us how we need to become mindful of our spending habits considering the family responsibilities we are loaded with?

I feel there is always a way to put across a point.

8. Married Women by default Should be the Care-takers of their In-laws

While society clearly thinks that parents are not daughters’ responsibility, they are categorical about this as well; That daughters-in-law should take care of their in-laws at any cost.

Women are forced to FAIL their Parents

Indian In-Laws Have this MAIN expectation from their DILS that the latter should take care of the former – Fine, that’s fair.

But why this apathy towards parents with female children?

The same society that bad paints a woman when she ditches her in-laws, expects her to stay distanced from her parents – VERY FAIR & MORAL, isn’t it?

Women are often epitomized as humans with undue patience and love. Meaning, they are ones who could make compromises and sacrifices easily.

Does that mean they should hide their emotions irrespective of the situations? Should they give up their stand for their families even when they are right?

Women should be Guardians of their Relationships

My mother would often advise me, “You have to adjust no matter what, in your In-Laws’ place. Don’t get into unnecessary arguments with them. It will affect your relationship”

Of course, I am not going to get into unnecessary fights with anybody for that matter. But why is this advice being given to women only?

Is that how a healthy family works?

Why are Compromises just restricted to women?

10. Women should Wake up Early No matter what

From waking up early in the morning to finishing off all household chores on time, all duties befall married women.

Unfortunately , if they sleep an hour more during weekends, people don’t like it.

The other day, my aunt who called up casually asked me, “When did you wake up?”

And she was taken aback, unable to process the fact. Why?

On the other hand, all those working-men who are seemingly experiencing work-induced fatigue are allowed to enjoy the coziness of extra sleep without any complaints. Is that even fair?

My argument here is not about Women waking up early, which is definitely a good practice. BUT why are they forced?

11. Women are Restricted to Make Decisions on Their Career

Just like how men decide their career, women have the right to choose theirs as well. Correct?

But is that the actual case?

Married Women with Children should not Work

“Look! She has a one-year-old daughter. How is she even able to give priority to her career?” – This is how society presumes women. Is that even fair?

In India, in-laws take authority to decide whether their daughters-in-law should work or not. Is that not a breach of the basic rights of these women?

When one of my friends was considered for alliance by her in-laws, they were adamant that she should not quit her career.

“We want our daughter in law to work, no matter what”, they cautioned.

And she was literally forced into it against her desire of being a house-wife. Is that even fair?

Whether women want to work or not, they have to decide. IT’S THEIR RIGHT, after all.

Who is Society to decide things for them?

The downside here is even if women are working, their domestic responsibilities do not come down. And that’s how unfair this society is to women. 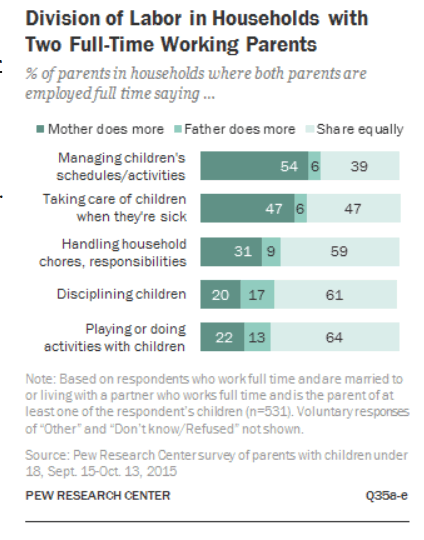 12. Women Should be Socialising A lot

Characteristics and traits vary from person to person. Having said that, is it fair to expect a reserved woman to socialize and mingle with everybody?

Chit-chatting Women are considered the Best

My mother once pointed out, “Look at Ravi’s daughter-in-law. How lovely that she talks and mixes so well. She seems so sweet.”

Okay, does that mean those not-so-talkative are bad?

13. Women Should Limit Their Acquaintance with the Opposite Gender

When a woman talks to a man, they are considered bad by OUR developed society!

My mother often warns me, “Don’t get along too much with the boys. We never know what their true intentions are”

Okay. Its good to be careful, but why generalise that all male-female relationships are wrong?

Are we living in an age where male and female relationships are just considered NORMAL?

14. Women should Eat Only After Others in the Family Eat

God knows why there is this unsaid rule in most families that women should only eat after serving others. Is that even fair?

Women should Serve Guests all the time

Let’s say there are guests at home.

These men order women in their family to serve the guests including them.

WHY for a change, can’t men help their wives OR mothers in serving their guests? Wouldn’t that be awesome?

Dear Society, Treat Women As One In You – They Are Human Beings After all!

But sadly, that is not the case.

Being human beings, at least from now on, let’s turn more moral and work towards treating our daughters-in-laws and daughters right. That’s the only way to establish Peace in Society!

If you think this blog could benefit every married women out there, feel free to share it in your circles. Let’s create peaceful society and happy marital homes for women. Thank you in advance!