Are You Having A Difficult Time Dealing With Your In-Laws’ Arrogance?

Are you wondering how to deal with arrogant in laws? Are you someone who is flustered with your in-laws’ smugness all the while?

When in-laws don’t pay heed to the emotions of their daughters-in-law and only care about themselves, they come across as arrogant. This blog deals with tackling such people effectively. Come, let’s get started! Are You Wondering How To Deal With Arrogant In Laws – 11 Powerful Tricks Just For You!

Some in-laws by nature consider themselves superior. They always reel in the world of deception and never accept their mistakes.

Such people test the patience and temperament of their daughters-in-law time and again, ending up earning the lattars’ wrath and detestation.

Arrogant in-laws tend to wreck the mental health of their dils. By acting like they are “the knower of everything”, they leave no stone unturned to establish their presence and stance.

How should daughters-in-law handle such arrogant in-laws?

In this blog post, I have come up with 11 Long-term solutions to deal with arrogant in-laws wisely. Come, let me walk you through them.

If your in-laws are arrogant, it is only natural for them to strive hard to keep themselves the center of attraction all the time.

They would never care to listen to you even if you are right. No wonder they would always remain at the talking end.

I know, such instances would spike your rage and make you loathe them even more. But no, you are not supposed to do that.

Rather, turn a deaf ear to your in-laws’ rantings. Let them boast as much as they want – You just keep minding your business.

That will salvage you from a lot of trouble.

How To Deal With Arrogant In Laws – Better Limit Entertaining Them!

When your in-laws move mountains to target you, and make you a subject of mockery always, you should buckle up and turn defensive of yourself.

By defensive here, I mean you should limit talking to them. Engaging them too much in conversations will only give them enough scope to take digs at you every now and then.

Why should you allow your in-laws’ insensitivity tamper with your self-respect?

Why should you entertain people who don’t even respect you? 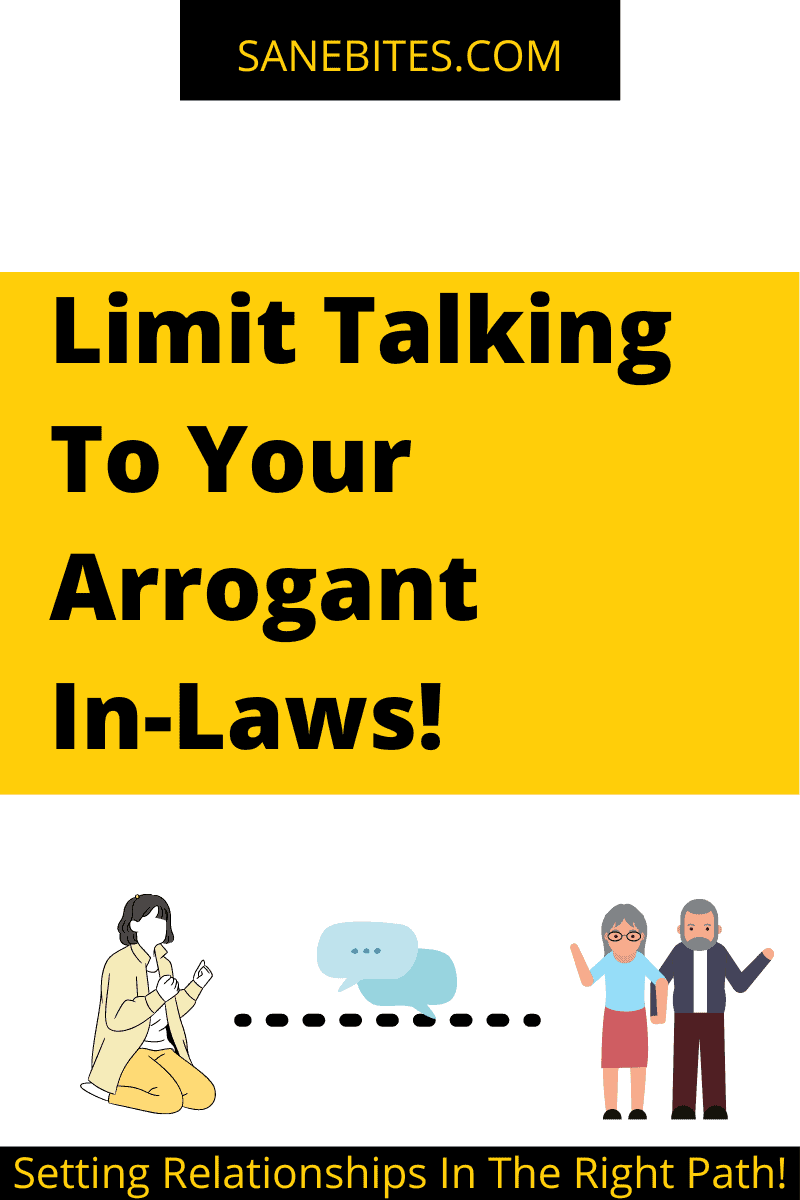 Establish Your Boundaries Clear With Your In-Laws

As a daughter-in-law, when you allow your in-laws to enter your territory, you don’t just give them the key to merely enter.

You also authenticate them to take control of you. You intentionally or unintentionally let your in-laws graze over your personal and private affairs. Is that even desirable?

Would you allow anyone for that matter to cramp your personal space and let them do whatever they want with you?

Are you ready to let your private life and emotional well-being go astray?

That way, your in-laws will know what they are entitled to and won’t take you for granted.

How To Deal With Arrogant In-Laws – Handle Them Assertively

As a woman and daughter-in-law, it is only good if you adopt a confident and bold disposition before your in-laws.

That way, when your in-laws trespass their limits, you could let them know their position clearly.

Of course, when matters get worse in some cases, shouldn’t you put a full stop to it? Where silence doesn’t work any longer, shouldn’t effective words be used to win over situations?

By being assertive, you would be able to take a stance for yourself and speak up for yourself.

That would not just envelop you with enough satisfaction but also preserve your sanity and bolster your confidence in the long run. 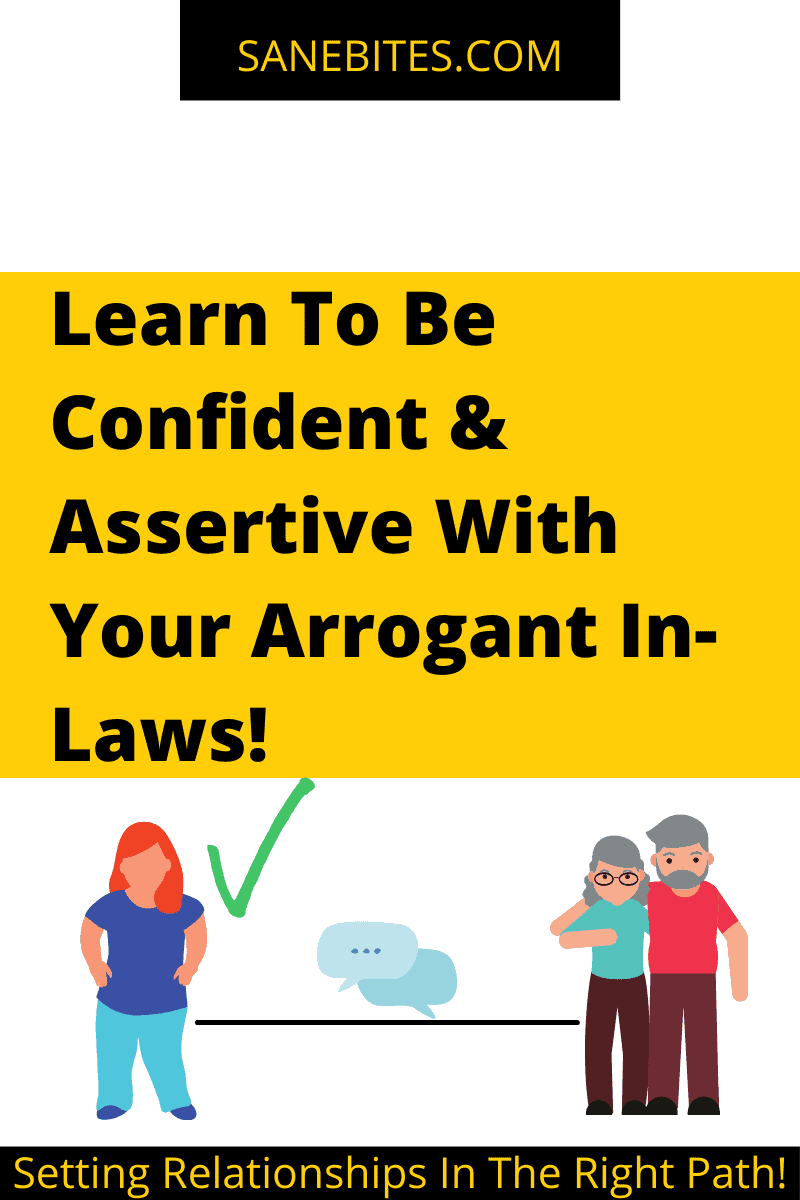 Accept Your In-Laws’ Nature No Matter What

One of the important ways on how to deal with arrogant in laws is to accept the fact that your in-laws are arrogant.

An article from the timesofindia discusses the depths and importance of acceptance in relationships.

By doing so, you wouldn’t pay much attention to their negative characteristics anymore as you understand what they actually are.

You would realize that there is no point in discussing them because they are never going to change.

That way, you would be saving on your energy (without complaining about them ) and your mental health too! Isn’t that awesome?

Also Read: Is It Ok To Not Like Your In-Laws?

Don’t Argue With Your Arrogant In-Laws

Having a galore of differences with your in-laws isn’t a thing to reckon about.

Your arrogant in-laws might test your temperament time and again by trying to oppose your ideas and enforce their opinions on you.

But you know what? Sometimes, you don’t have to prove your stance at all.

You don’t have to explain yourself to your in-laws. In such a case, how to deal with arrogant in-laws?

Just do what you think would be appropriate for the situation and don’t waste your time arguing unnecessarily! 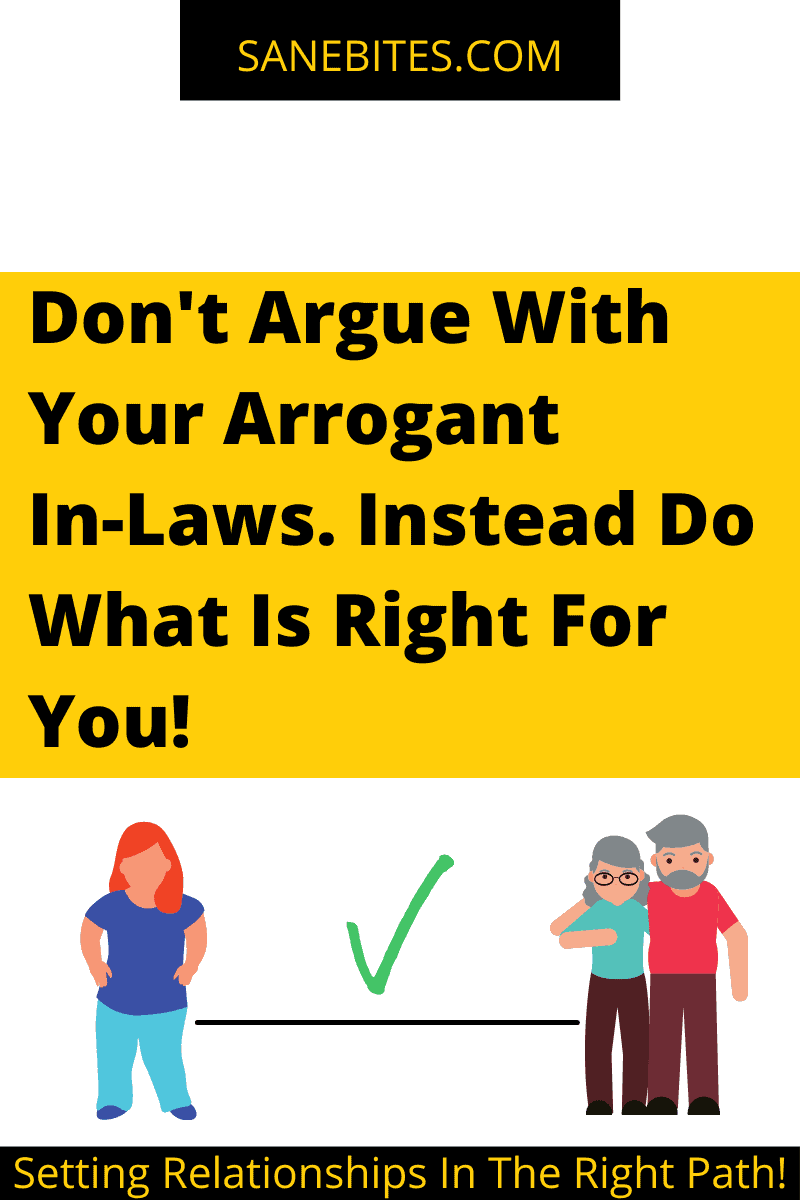 Focus On Your In-Laws’ Positive Traits

I know your in-laws’ annoying behavior at times could get you sick to your stomach.

But do you think it is good for your mental well-being?

In such circumstances, I highly suggest you divert your thoughts to some of those positive aspects of your in-laws.

It could be your in-laws affection towards your spouse OR your mother-in-laws’ exemplary cooking skills.

Reminding yourself of such good things will placate you and help you relax, do you get me?

Nothing could feel good like a partner who supports you in times of distress; Someone who could hold your hand when your in-laws become too difficult to handle.

That is why it is important for you to be transparent about your in-laws with your spouse in particular.

Being his better-half, what is wrong if you share your feelings about your in-laws with him?

Remember, your spouse is your key to dealing with your in-laws most of the time! 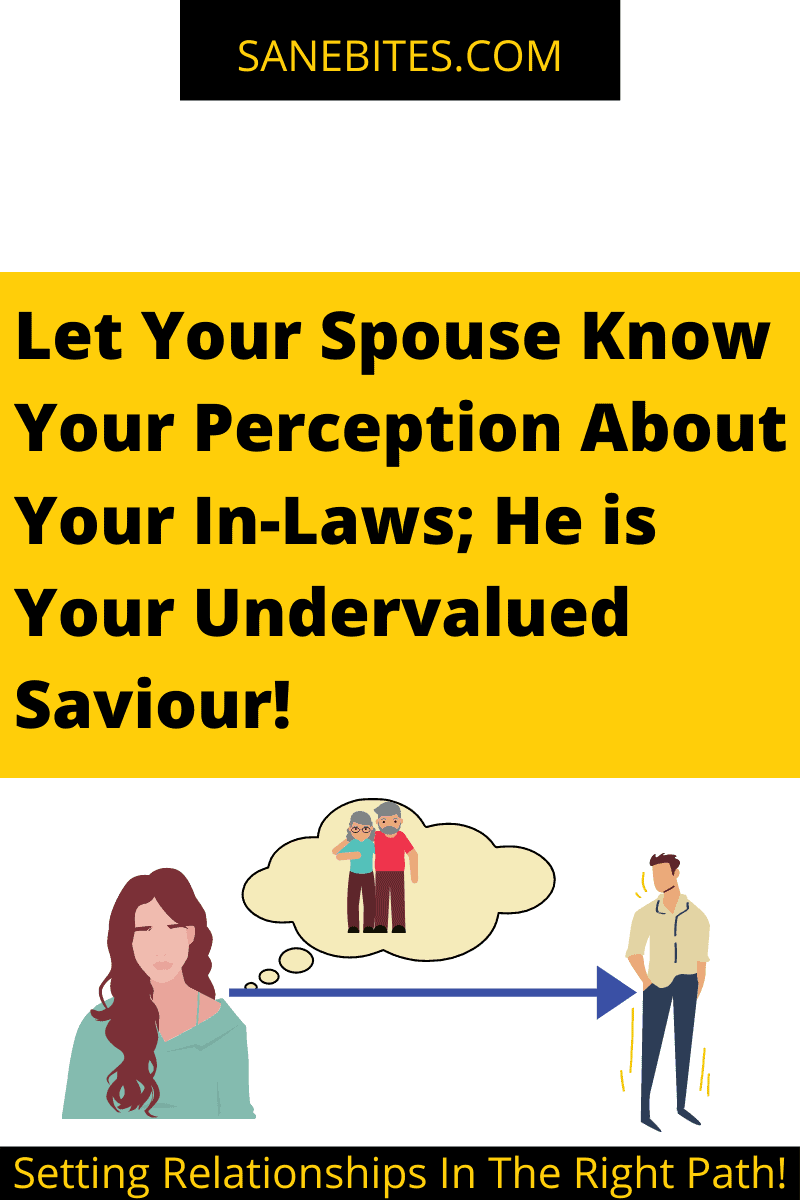 Don’t Try To Impress Your In-Laws

If you have ideas of appeasing your arrogant in-laws by behaving and talking in their favor, kindly drop the plans.

Say you try to please your in-laws by cooking their favorites all the time but they don’t even value your gestures. How would that feel?

Don’t you think by taking this responsibility of impressing your in-laws, you would be losing your energy and respect?

Have this in mind – At any point in time, your in-laws should accept you as you are and hence it is not a good idea to impress your in-laws. 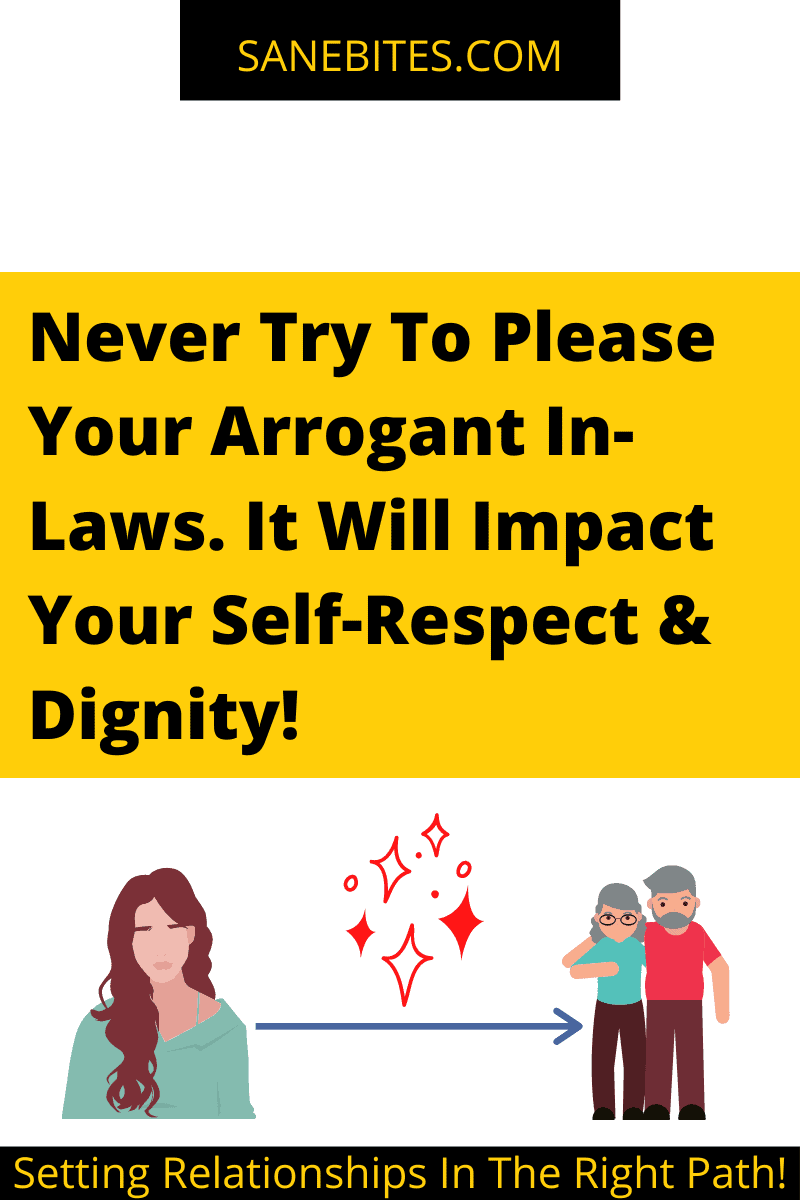 If you live with your high-handed in-laws, it is important for you to build your own space at the home front.

Be it cooking OR establishing a personal space, you have to create your own-zone that is rid of your in-laws’ intervention.

This will in every way, keep you out of your in-laws’ way, saving you from many problems. Isn’t that a good idea?

I understand that it must be complex to put up with in-laws who are contemptuous in every way.

But instead of dreading that aspect, you have to find a way out of the situation, isn’t it?

That is why it is important for you to keep yourself engaged in some activity or the other when you are living with your in-laws under the same roof.

You could work on setting up your career OR rekindle yourself to find your passion.

By diverting your thoughts to something productive, you could avoid facing your in-laws. Isn’t that a good idea? 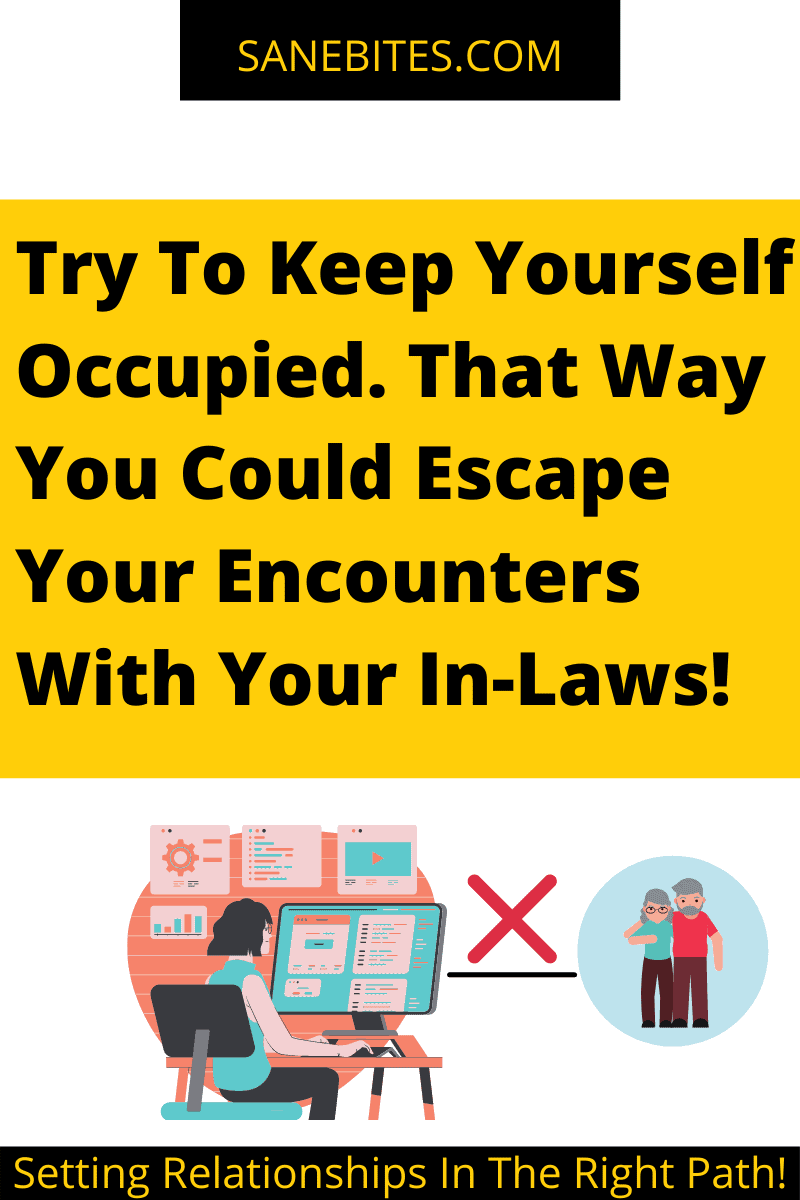 How to deal with arrogant in laws?

Knowingly or unknowingly, your in-laws’ immature behavior with time would end up creating an explosive ball of hatred in your head towards them. Is that even desirable?

Why do you have to let your in-laws take a toll on your mental health? Why should you lose yourself for no reason at all?

That is why, you should learn to forgive your in-laws’ insensible acts every now and then.

By doing so, you could save yourself from grudges and inhibitions that could otherwise ruin your mental health on a major scale. 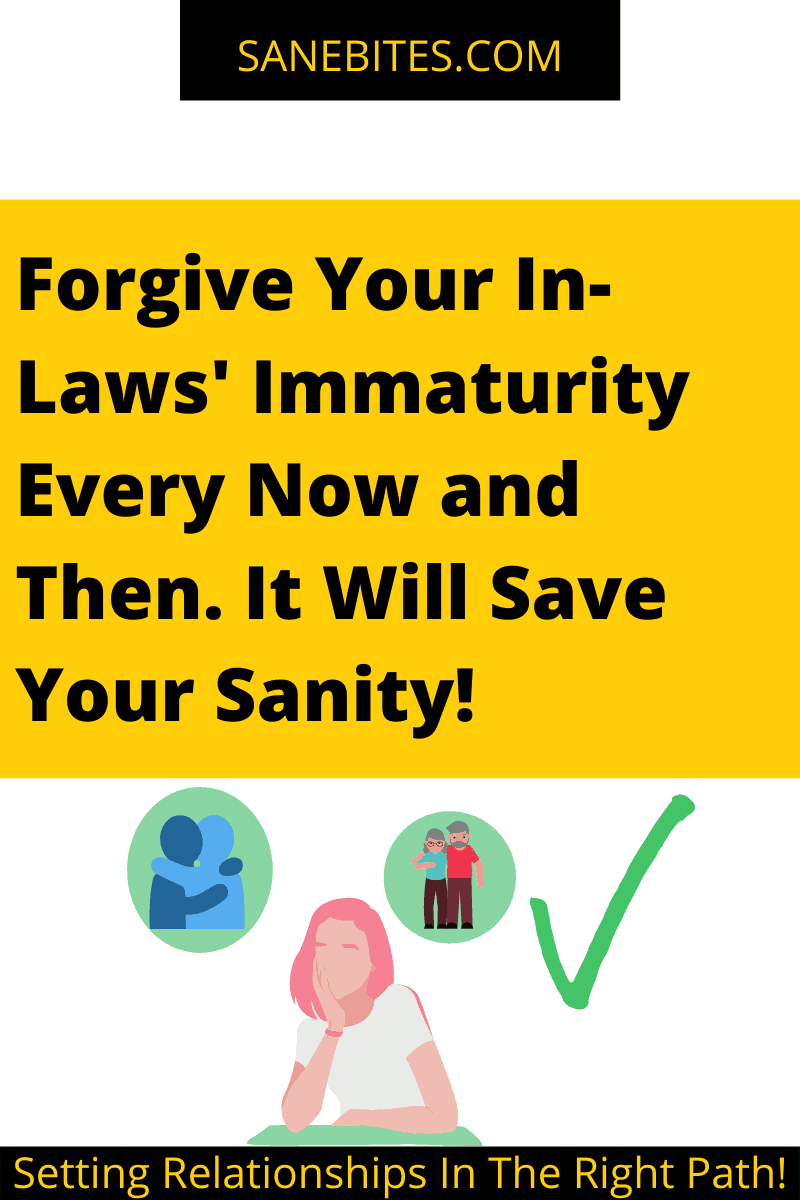 By armouring these 11 techniques, you could unwind easily and unleash yourself on the right track towards tackling your difficult in-laws.

What do you think? Share your thoughts in the comments section below!